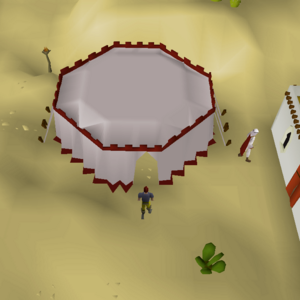 The Bandit Camp can be found in the Kharidian Desert. The camp is home to bandits, and they will attack players wearing Zamorakian or Saradominist items because they are followers of Zaros and bear a grudge against the followers of Zamorak and Saradomin for persecuting their ancestors. Desert heat does not apply within the camp.

The Bandit Camp contains a general store that sells waterskins, which can be useful for Mining at the nearby quarry, though they are not needed in the camp itself.

In addition to traveling on foot, there are a few shortcuts to get here:

During the First and Second Age, a large part of Gielinor was ruled by the god Zaros. The Second Age ended when many of the Mahjarrat, with some other creatures, led by Zamorak, rebelled against their god. After a long fight, Zamorak impaled Zaros with the Staff of armadyl and stole his godly powers. Zamorak was banned from Gielinor, but later returned as a god. This ignited the cataclysmic God Wars. During these wars, the few Zarosians who had stayed true to their god were often harassed by others. Many of Zaros' towns were overrun, like the mighty city of Senntisten, and many of the former god's followers were killed. However, some managed to stay alive and fled to the Kharidian Desert. There, their descendants now live as outlaws in the Bandit Camp, still very loyal to their fallen god, Zaros.

The Bandit Camp is home to a bar, The Big Heist Lodge. This is the only known source of Bandit's brew, an ale that will temporarily boost a player's Thieving level by 1. However, it costs 650 coins, and hence it might be more expeditious to use Sq'irkjuice instead.

The town is also home to a simple general store where you can find Tiles, who exchanges notes for Items for a small payment.

There are two main areas used in town which feature in the Desert Treasure quest: mirrors, used to discern the whereabouts of the Diamonds of Azzanadra, and the secure chest in a large tent in the south area of town, containing Rasolo's gilded cross.

The bandits in the camp will attack anyone wearing an item of either Saradomin or Zamorak. This makes the camp a highly popular training spot as it will keep the residents attacking players with no tolerance. You can also just attack one of the bandits, and the rest of the bandits nearby will attack you. This will wear out once you kill all nearby bandits. This makes the area regularly crowded and many high-levelled players train their combat stats to level 99 fighting bandits. For melee, you need a fast weapon, such as an abyssal whip. If you haven't completed Monkey Madness I (required to wield the dragon scimitar), have under level 70 attack, and wish to directly train Strength, consider opting to instead use (preferably) a Viggora's chainmace if you can afford one, or a dragon sword if you can't.

If you plan to use the protection prayer method in combination with prayer potions, it is important to note that the Viggora's chainmace is identical to the dragon scimitar, apart from the mace possessing +2 prayer bonus, not requiring any quests, and its use of the crush attack style. Both are one handed weapons, allowing for the use of prayer or offensive boosting item in the shield slot.

Players with at least 60 Attack and less than 60 Defence should choose between using the Toktz-xil-ak (in conjunction with the berserker necklace), Viggora's chainmace (+2 prayer bonus), Saradomin sword (+2 prayer bonus but two-handed), and other 4 tick melee weapons. Players with 60+ Defence who can afford the set should highly consider using full Obsidian armour with a Berserker necklace, Obsidian sword, and either their best Defender or an Unholy book (if utilizing protection/offensive prayers). For those using the prayer method, the book of war, book of balance, or even a broodoo shield (no quest required) can serve as a budget unholy book. In place of defenders below rune, one can opt for an Obsidian Shield.

For healing, several methods are commonly used, such as Guthan's set, Saradomin godsword, or food. You can un-note your food in the local general store, by bringing coins and noted food (commonly tuna if using melee or wine jugs if using range/mage), and then using the food on Tiles. A God cape, holy blessing or Unholy blessing or God armour, mainly platelegs are commonly used to make the bandits non-tolerant towards the player, helping gain 60,000 or more experience an hour for combat levels 100 or more. It is a great way to level in any combat skill.

For prayer utilizing methods, players should attempt to balance the need for adequate offensive bonuses whilst optimizing their total prayer bonus where possible, potentially using God blessings, unholy symbol/amulet of fury/various enchanted zenyte jewellery, Vestment cloaks/Ardougne cloaks/Trimmed skillcape/Fire cape/Infernal cape, God books, holy wraps, holy sandals, and other items. If you insist on using offensive melee/range prayer(s) in addition to protection prayers, you should know that the 5% and 10% offensive prayers are tied for the most efficient use of prayer points, assuming defensive boosts are irrelevant. Since bandits have +0 defence bonus and only 50/65 defence, strength prayers should generally be prioritized over attack prayers. Due to their very low total magic defence, accuracy boosting magic prayers are generally not worth the increased prayer point usage.