The Bandit Camp is an outlaw stronghold located in levels 17 to 24 Wilderness. It is rarely visited by players due to its remote location, distance from a bank, lack of local resources, and the risk of PKers looking for a fight. It is most often visited for Treasure Trails. It can be reached via the Bandit Camp teleport from the burning amulet. Doing so will give the player a warning message before teleporting them to level 17 Wilderness. 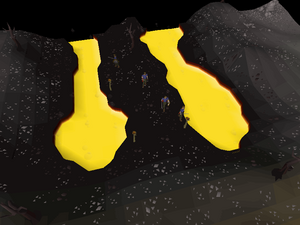 The south entrance of the bandit camp.

The Bandit Camp can only be entered from two ways: the south, and the east, as it is surrounded by walls. The south entrance is guarded by level 22 or level 130 Bandits. To enter the player must walk from levels 17 to 19 Wilderness along a narrow pathway with lava on either side, or go though the safer way, from the east where there is a break in the wall. This entrance is guarded by two giant rats, and one of them is of the aggressive level 6 variety.

Although little information regarding this camp has been released, it is led by the three NPCs with unique names; Black Heather, Speedy Keith and Donny the lad. They all wield steel scimitars and wear capes, in contrast to the regular bandit weapon, the longsword.

Most of the camp seems to have been destroyed; many of the buildings are falling apart. It is possible that this is the remains of a fortified city destroyed during the God Wars, as many other ruins located in the Wilderness are; the bandits may have found and populated its ruins.

The Bandit Duty Free general store is run here by Noterazzo. His store buys at higher and sells at lower prices than others, as the area is so dangerous that tax collectors do not visit him.

Neil sells Wilderness team capes ending in the number 7. He is located in (or near) the remains of the building next to the Bandit Duty Free General Store.

In the northernmost section there is also a pizza base shop, run by Fat Tony, which sells only pizza bases. Tomato and Cheese respawns on the table next to the stove where pizzas can be created.