From Old School RuneScape Wiki
Jump to: navigation, search
This article is about a mine in the Kharidian Desert. For the mine in the Wilderness, see Bandit Camp Mine.
Bandit Camp Quarry 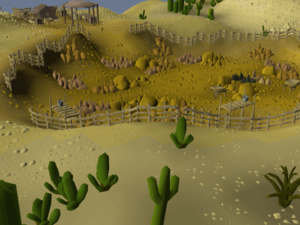 The Bandit Camp Quarry (also known as Enakhra's Quarry or the Desert Quarry) is a mine south of the Bandit Camp (Kharidian Desert). It is the only source of granite and sandstone rocks in Gielinor.

The quarry features in the Enakhra's Lament quest, as both sandstone and granite are used in the quest, which occurs next to the quarry. It is also a popular place to train Mining since it is the only place that has granite rocks, which are excellent for power-training.

It is possible, albeit inconvenient, to walk to the quarry from Shantay Pass, due to its distance. There are at least three quicker ways to get there:

Note that desert heat can affect players walking through the desert or staying in the quarry. (Prior to January 2007, no water was required in the quarry. This was changed most likely to reduce macros.) Desert heat can be avoided if a player has waterskins in inventory or is wearing the Desert amulet 4.

This quarry contains 28 Granite rocks that when mined, either give a 500g, 2 kg, or 5 kg piece. This requires 45 Mining. 32 Sandstone rocks are also located here. Like granite, they give 1 kg, 2 kg, 5 kg or 10 kg pieces at random. These require 35 Mining. The only other ores here are 2 coal rocks, which require 30 Mining, and 4 clay rocks, which don't have a Mining level requirement.

Unless a player has the Desert amulet 4, for a longer stay, players should complete Enakhra's Lament, as it allows access to the fountain featured during the quest, which can be used to refill waterskins. It is also recommended to bring at least three waterskins, for a longer mining trip. For this method to work, players would either have to drop their mined ores, have their Camulet, or some other teleport to bank with.