From Old School RuneScape Wiki
Jump to navigation Jump to search
The RuneScape Wiki also has an article on: rsw:Bandos
For the leader of Bandos' forces within the God Wars Dungeon, see General Graardor.

Bandos, also known as the Big High War God, is the god of war. He is lesser-known by the humans of RuneScape, although he has many followers of various (typically unintelligent) races. He is highly aggressive, violent, and values obedience and glory through battle above all else. He seems indifferent to the wellbeing of his followers and does not care if large swathes of his armies are wiped out - he fights solely for the sake of battle. Most creatures that follow Bandos are strong, but stupid. The main exception to this is the goblins, who are just stupid, though they make up for their lack of strength with their large numbers. Many of his followers seem to obey him out of a sense of awe, respect, and unquestioning loyalty; others were compelled to follow him out of fear.

The goblins live by four commandments, which Bandos provided them with during the fourth age, summarising his philosophy:

Not to run from battle. Cowards must die!

Not to show mercy. Merciful must die!

Not to doubt Big High War God. Doubters must die!

Not to make own plans. Thinkers must die!

Bandos arrived in Gielinor around the start of the God Wars. He brought with him several races to fight for him, such as the ogres, the orks, the goblins, and the ourgs. At some point, the Dorgeshuun goblin tribe grew unwilling, defected from Bandos, and hid deep beneath the earth to escape from the war and avoid his punishment. When Guthix awoke, Bandos, alongside all but one of the other major gods, was banished from Gielinor. Although banished millennia ago, the descendants of his soldiers are many and still highly devoted to their god. Bandos is almost entirely forgotten by humans, mainly because Bandosians rarely speak of their god with other races, and they rarely refer to him by name. Among the Bandosians, there is a legend of a "Chosen Commander," chosen by Bandos, that will one day lead the Bandosians to victory over the world. In Another Slice of H.A.M., the Chosen Commander is revealed to be Zanik.

The once peaceful marshy world of Yu'biusk as it appeared before Bandos' arrival.

Little is known about Bandos' past and how he became the god of war. The earliest known history about him is his arrival to the world Yu'biusk. On the world of Yu'biusk he encountered goblins, ogres, orks and other similar creatures. Bandos subjugated them and made them worship him and introduced them to warfare, which changed their peaceful society to one of constant conflict.

Bandos supposedly arrived on Gielinor during the Second Age, with him he brought the races from Yu'biusk and his intentions to wager war against the residents of Gielinor. Bandos established himself in the Feldip Hills, which he and his followers have maintained control of ever since. 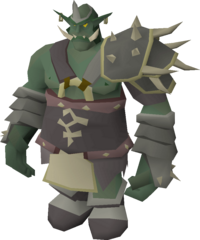 General Graardor, one of Bandos' most powerful generals.

Bandos was a notorious combatant of the God Wars fighting forces of other gods such as Zamorak, Armadyl and Saradomin for the sake of battle.

On the Isle of Souls Bandos sent his followers to retrieve a mysterious artfact known as the 'Soul Stone', which was being held and protected by Armadylean forces. Eventually the Soul Stone fell into Bandos' hands, and he apparently used it to wipe out Armadyl's forces on the island as well as his own.

He gifted a black tourmaline core to his general Snaarldor intending to invoke the magic of the Slayer Tower to animate the gargoyles of the ancient fortress ruins and make them serve as soldiers. This plot backfired as the tower was infused with Zamorak's magic, the gargoyles awoke and immediately started attacking the Bandosians, who had to retreat.

Like most other gods Bandos was banished when Guthix awoke and established the Edicts of Guthix.

After his banishment Bandos returned to Yu'biusk and in a fit of anger he waged a greater conflict than ever before, which ended up killing the remaining inhabitants and turning the once lush and fertile world into a desolate wasteland.

Following Bandos' banishment at the end of the God Wars, many of his followers fell into civil war amongst themselves. The goblin tribes fought amongst themselves in the Battle of the Plain of Mud which led to great casualties. Although Bandos could not communicate directly with his followers, he gave the goblin Hopespear a vision ordering to stop the fighting otherwise they'll wipe themselves out. In the vision Bandos gave him the four commandments and stated that he would send a Chosen Commander to someday lead the goblins to victory over the world. Following Hopespear's vision the goblins seized their infighting and constructed the Goblin Temple, which sank into the mud of the drenched battlefield, where the goblins had fought.

Outside his following Bandos' name and history faded into obscurity as most of his followers did not speak about him to outsiders and few texts were written by them.

Several years before year 169 of the Fifth Age a young Dorgeshuun goblin named Zanik drank from the Tears of Guthix as she had done before, as she was a friend of its guardian Juna. However one time when she drank the Tears the symbol of Bandos burned itself into her forehead marking her as Bandos' Chosen Commander. Soon after Zanik would learn of the surface world as some Dorgeshuun miners had unintentionally made contact with the surface world, which they had been separated from for centuries. 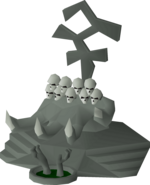 A Bandosian altar, possibly depicting the hand of Bandos.

Items in italics do not provide protection against Bandos' troops in the God Wars Dungeon: