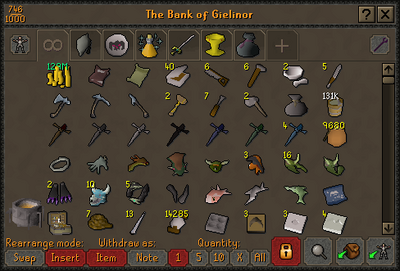 The bank of a player.

A bank is a facility that allows players to deposit, store, and withdraw their items. It is indicated on the world map with a dollar (

) icon. It is usually a standalone building, but sometimes takes the form of a chest or even (rarely) a non-player character.

Within a bank, free-to-play accounts may store up to 400 stacks of items, while members can store up to 800. An additional 8 spaces are given if the player has a Bank PIN and another 8 spaces if they have RuneScape Authenticator activated on their account, bringing the highest number of spaces a player can have to 816.

Banks were once popular locations for trading as players were right beside where they keep most of their money and items. However, with the introduction of the Grand Exchange on 26 February 2015, most transactions are now conducted there.

Note: Ultimate Ironman accounts are blocked from storing items in a bank.

Players may access their bank account by right-clicking a banker or bank booth or by speaking to a banker and going through their dialogue.

Bankers are NPCs who operate banks. They are present in nearly every bank, including the Grand Exchange, standing behind a bank booth or desk. Human bankers can be identified by their grey suits or by a huge sack on their backs (to represent the banked items that they have stored). Bankers of other races, such as ghost bankers, gnome bankers, fairy bankers, elven bankers, or dwarven bankers, can also be found in banks in areas inhabited by those races.

Ultimate Ironman accounts may use the un-noting feature of bank booths even though they are otherwise blocked from using banks.

Bank chests provide the same functionality as bank booths. They are available in places such as in the Lumbridge Castle cellar (during and after the Recipe for Disaster quest), Al Kharid Duel Arena, and many minigames such as Blast Furnace. They are also available in many safe areas of Pvp worlds.

There are many banks scattered throughout RuneScape, and may be located in the world map with the dollar sign (

Some banking services charge commission. It may be a percentage of what's being deposited, or coins; an example of this is the Dwarven Boatman east of Arzinian Mine's entrance, who will store players' gold ore for 20 percent commission (or 10 percent with Ring of charos (a)), rounded up.

Several banks have inaccessible areas, such as stairs, doors, fences, and basements. It is unclear what is actually in some of these areas.

Players can open their bank account to deposit or withdraw items in several ways:

When a player has access to their bank, they can deposit items from their inventory. Players can deposit 1, 5, 10, n (the last value entered for the "Withdraw-X" option), "All", or "X" (custom amount) items in one menu. The "X" option allows a player to specify the quantity of items to be deposited, and lock in the custom amount as n until another "X" amount is entered. This feature is useful for players depositing the same number of items repeatedly, such as during Runecraft and Fletching.

Some banks charge commission for using their services. The Dwarven Boatman and Odovacar are examples of this.

Some items, such as Genie lamps, Books of knowledge, and Monkeys, cannot be stored in a bank. If a player attempts to do so, they will receive a chatbox message stating, "A magical force prevents you from banking this item!" or another such message depending on the item. See the full list here.

The "Collect" right-click option on bank booths and bankers opens the player's Grand Exchange collection box, where players can receive the money they earned or items they bought from Grand Exchange transactions. This feature is available on all banks in Gielinor, so players may collect items from any bank in any location without having to make a trip to the Grand Exchange.

The collection box interface shows the status of all of the player's active trades. Completed trades are shown in green. On-going trades (i.e. large quantities or items which are difficult to buy/sell) may be collected bit by bit as the trade goes through.

Some items such as experience lamps and certain quest items cannot be banked, giving a message saying "A magical force prevents you from banking this item". Other items, such as seed packs and supply crates cannot be stacked in the bank, causing each item to take up a separate bank slot. Most other items, however, always stack in the bank with other identical items, even if they do not normally stack in the inventory. Degradable or dischargable items do still need to have the same amount of charges to stack in the bank though.

Players can create up to eight tabs in their bank with which to help organise their items. With this feature, players may store items with similar characteristics together, such as placing their items used in the Farming skill in one tab and their Fishing items in another tab. Many players have a "Quest" tab, a "Tools" tab, and an "Armour & Weapons" tab, as there are many items that fall within these three categories.

The "All" tab (labelled with the infinity symbol) shows all the items in the player's bank, with items not sorted into tabs shown first and dividing lines separating the bank's tabs.

To remove a bank tab, the tab may be right-clicked and the 'Collapse tab' option selected, putting all items in it back into the main tab. A tab is also automatically removed if it is empty.

With the "Swap" option selected, drag an item on top of another to 'swap' their places in the bank. Thus, item (A) is swapped when another item (B) is dragged and dropped onto the item.

Conversely, the "Insert" option allows players to drag an item in the space before or after another item to "insert" it, moving all other subsequent items along one space. Thus, item (B) will be inserted in between items (before item A), moving all items that follow along one space.

The Search button is used for finding items in the bank. After pressing the "Search" button, the player can type all or part of the name of the item they are looking for and the bank interface will filter out all items whose names do not contain what the player entered. This provides easy access to rarely used items that need to be found quickly or to items that have many versions that look similar such as herbs.

The Item/Note toggle button is used to toggle withdrawals between item form and noted form. If this toggle is set to "Note," most unstackable items withdrawn from the bank will be withdrawn as banknotes. Banknotes cannot be used as their equivalent item in nearly any way, but are always stackable, allowing large amounts of unstackable items (such as ores and logs) to be withdrawn or traded without taking up a large amount of inventory space. Storing a banknote in a bank, selling it to a shop, or using it on a bank booth or banker will convert the note to its item equivalent.

In RuneScape Classic, notes did not exist, but instead players would trade in bulk using certificates, which could only be made for certain items. Certificates were made by bringing the desired items to the "certer" NPCs, instead of simply withdrawing from the bank in certificate form. Every certificate was equivalent to five regular items.

The numbered buttons (1, 5, 10, X and All) are used to change what quantity of the item is withdrawn or deposited when left-clicking. The X option by default uses the last set custom quantity, which can be set by right-clicking on an item and selecting "Withdraw-X" or by right-clicking the X option in the quantity toggle.

Clicking the Deposit inventory button allows players to quickly dump all the items in their inventory into their bank. Players can disable this button by unchecking the option in the bank settings menu.

Clicking the Deposit worn items button allows players to deposit the items they are wearing into their bank. Players can disable this button by unchecking the option in the bank settings menu.

The use of a 4-digit Bank PIN (Personal Identification Number) adds a significant extra layer of security to an account. It is optional, but recommended. Players may use the button located at the bottom of the bank interface or speak to any banker to set up a PIN or to cancel it.

When the PIN is active, players must enter the four-digit number the first time they use the bank, the Grand Exchange, or a STASH unit, after logging in. They need not enter it again for as long as they remain logged in. They can also use a setting in the PIN settings menu to toggle not to require the PIN if the player logs out for less than five minutes.

This means that even if a hacker is able to log in with someone else's username and password, the most they will be able to steal is any wielded items and whatever is in the inventory. They will not be able to access the contents of the bank or any cash or items on the Grand Exchange without knowing the PIN. Therefore, it is essential that the PIN be hard to guess.

The item incinerator destroys stacks of items in the bank. Note that extreme care is advised when using this feature, as it permanently destroys items and there is no way to reverse this.

The incinerator can be turned on by accessing the settings button found in the top right corner of the bank interface, then clicking on the item incinerator option. After this is done there will be a new icon in the bottom left of the interface to indicate the item incinerator is active. Drag the stack of items over the incinerator icon and a confirmation prompt will be given. After confirming this will destroy the selected (stack of) item(s).

The incinerator destroys the entire stack dragged onto it. There is no way to incinerate only a select amount of the items, however, the player can simply withdraw the items in banknote form and drop them.

Having a bank full of filler items allows players to decide which items they want deposited when using the Deposit inventory or Deposit worn items buttons. For example, if players are crafting leather items, they can remove the needle and thread from their bank, enable the bank fillers, and be able to use the Deposit inventory button to deposit everything except their needle and thread, as their bank would have no space to hold them because all of the space is taken up by bank fillers.

Clicking the "Show worn items" icon on the top left corner of the bank interface allows players to equip their armour and weapons without having to exit the bank interface. It can also be accessed by pressing the F-key bound to Worn Equipment.

Players can right click various items, such as food, potions and equipment to interact with them without exiting the bank interface.

The Show tutorial button is turned on by default and is right next to the close button in the top right corner. The tutorial is mainly designed for new players, and can be turned off in the bank settings.