From Old School RuneScape Wiki
Jump to: navigation, search
The RuneScape Wiki also has an article on: rsw:Bank chest
This article is about the common bank chest. For the bank chest on the small island on Fossil Island, see Bank Chest-wreck.
Bank chest 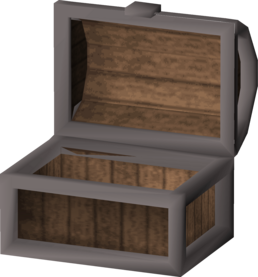 A bank chest is an interactive scenery item that allows quick access to a player's bank account, usually found in remote locations or places where a normal bank would not fit. Like any other banking facility it is indicated with a bank icon (

Players can access their bank and their Grand Exchange collection boxes at bank-chests, but must visit a Banker to change their PIN settings or Grand Exchange offer notification settings.