From Old School RuneScape Wiki
Jump to navigation Jump to search
The RuneScape Wiki also has an article on: rsw:Banshee
The wiki defaults to the British convention for floor numbering: Ground floor, first floor, etc. This may be changed by clicking the moon icon at the top right of the site.
This article is about the normal variant. For the high-level variant, see twisted banshee. For the superior variant, see screaming banshee.

Banshees are a Slayer monster that require level 15 Slayer to kill. They can be found at the Slayer Tower in Morytania on the ground floor[UK]1st floor[US], on the eastern side. Players must wear earmuffs or a Slayer helmet while fighting them in order to avoid the effects of their screams, which causes the player to take 6 damage and have their stats greatly reduced in Attack, Strength, Defence, Ranged, Magic, Prayer and Agility with every attack received. There is a safespot to the north of the staircase leading to the 1st floor[UK]2nd floor[US], behind the standing torch, between the staircase and wall. As banshee's attacks are magic-based, it is advised to wear ranged armour in order to minimise damage taken while fighting them. As banshees qualify as undead, the effects of the Salve amulets and the Crumble Undead spell will work on them (note, however, that the Salve amulet and Slayer helmet effects do not stack).

Every time you land a hit on a banshee, no matter the number, it will regenerate 1 Hitpoint. 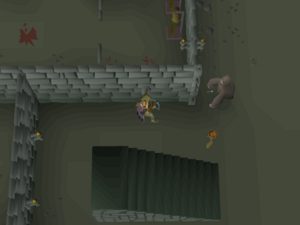 The red shaded area shows approximate safespot for firing at Banshees on the ground floor of Slayer Tower.

Drop rates estimated based on 64,500 kills from the Drop Rate Project, unless otherwise cited.