Honour points can be used to improve the level of each role, redeemed for combat equipment, or gambled for a chance to receive the rare pet penance queen and dragon chainbody.

There are four types of Honour points associated with each role: collector, healer, defender, and attacker. Players gain honour points at the end of each successful wave based on their performance in their role and the team's overall performance. With each successive wave, players earn more points as the difficulty increases. Upon killing the Penance Queen in the last wave, players will receive 80 Honour points in their role and 5 points to the other 3 roles.

Each team member gets points based on the team's performance plus points based on their own role. A player not TELLING (MOUTH icon) their partner what action to DO (EAR icon) does not incur a direct immediate penalty, but may result in penalties for the entire team due to them not knowing the right actions to perform. However, as seen in the table above, the healer and the collector do not get heavily penalised when using wrong food / collecting wrong eggs, and thus, it is advised that they do guess their calls to save time waiting for the other player to call. This is not applicable to the attacker because they are heavily penalised ( around -1 point per wrong guess ). Note that the defender does not get penalised when using wrong food; in fact, it is sometimes very useful to use wrong food in defending. 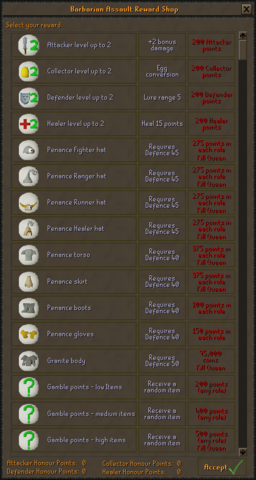 Players may spend these honour points by talking to Commander Connad, who can be found in the Barbarian Assault entrance hall, near Captain Cain. They can choose to:

Players may upgrade the level in a particular role from Level 1 up to Level 5. By upgrading their levels, the player gains extra abilities such as extra damage, higher healing, etc. However, each upgrade requires spending a certain amount of Honour Points. A total of 1,400 Honour Points are needed to obtain a Level 5 role. 5,600 points are required to obtain Level 5 in all roles. Obtaining the maximum level in all roles is one of the requirements needed to complete the Elite Kandarin Diary.

A summary of the level upgrades for each role may be found in the following table.

A player wearing the Fighter torso, one of the most sought after items from Barbarian Assault.

Players may also purchase Penance armour using their Honour points. Certain items require the player to kill the Penance Queen. If a player is only missing a few dozen points and will probably be able to earn them before their next Queen kill it is probably worthwhile to keep saving up. Points from all roles are required. If players have penance gear they no longer need, they can use it on Commander Connad to receive a point refund equal to 80% of the purchase price; any queen kills spent will not be refunded.

There are 3 methods of gambling, each with different costs:

These Honour Points are spent from a single role of the player's choice.

The odds of getting a dragon chainbody from a high gamble are exceedingly slim. The odds of obtaining it are, as quoted from Jagex, "About the same odds as Zamorak suddenly deciding to give up his evil ways.", which, according to RuneScape lore, is nearly zero. Mod Mat K confirmed that the actual rate was 1 in 16,000.

At current prices, the expected value of a high gamble is approximately 114,308.14 (228.62 per point), excluding clue scroll rewards and pets.

The clue scroll (elite) and pet penance queen will always be rolled in addition to one of the main drops.