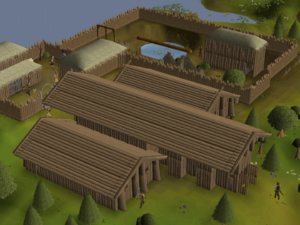 The Barbarian Outpost is a fenced stronghold north-west of Baxtorian Falls and north of the Tree Gnome Stronghold.

Locals will address players who have completed

There are four main ways of getting to the Outpost:

The Barbarian Assault minigame is a battleground established by the Barbarians to fight against Penance creatures. Players can optionally complete the tutorial by talking to Captain Cain in order to get a basic understanding of how the minigame is played.

Players must form a team of five players in order to play. Completion of each wave will reward each player with Honour points specific to the role they chose. Honour points can be used to redeem a variety of combat-based equipment, notably the fighter torso. Players can also gamble Honour points for a chance to receive the rare dragon chainbody or the pet penance queen.

Alfred Grimhand's Barcrawl to access. This course is a lap-based obstacle course consisting of eight obstacles that players can pass in return for Agility experience. If all obstacles are passed in the correct order, some bonus experience is rewarded at the end of the lap.

The Agility Course only requires 35 Agility for entry, allowing the player to potentially enter as low as level 30 Agility with a boost from Summer Pie.