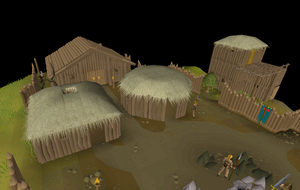 A century ago the art of Runecraft was rediscovered, allowing humans to quickly dominate most of Gielinor. The mountain tribes of Rellekka embarked on a crusade to stop the use of magic and runecrafting, which they believed belonged only to the gods. During this time, the first Wizards' Tower was burned to the ground, and the magic-using Imcando dwarves were driven to near-extinction.

As casualties mounted however, the tribes dwindled and were dispersed, and the Barbarian Village was established in between what is now Varrock and Falador as a temporary outpost until the tribes could recover. Over time, the barbarians gradually settled down and the village became a more permanent establishment.

Barbarian Village can be entered west from Varrock, east from Falador, north from Draynor Village, and south from Edgeville.

Prior to the update that added the Stronghold of Security, the Barbarian Village was an extremely dangerous place for players of combat level 20 or below because barbarians would be aggressive to these players, ganging up and killing them in a few seconds.

Peksa's Helmet Shop is the only non-members store where players can buy helmets, other than Valaine's shop in the Champions' Guild, which sells black full helms.

There is also a perpetually burning fire in the middle of Peksa's Helmet Shop which players can use to cook the fish they caught in the fishing spot just outside the village's walls.

This bar is located in the large building in the north of the village, known as the Long Hall. Free beer and cooked meat respawns on the tables. However, level 17 barbarians and the level 29 Gunthor the brave are inside the bar, so low level players are taking a risk to go in. There is a single level 15 ranged Barbarian inside or around the hall, a change from the older versions where all Barbarians could attack using throwing axes.

This is a popular area to train ranged combat, using the tables for cover, then moving out to collect arrows and drops.

To the east of the village are some fishing spots in the river. Players can fish with feathers or fishing bait at these spots. This is one of the most popular fishing spots in the free world because of its relative proximity to the bank in Edgeville where players can store their fish as well as the Stronghold of Security and the Edgeville Dungeon. It is also very popular for power fishing players, fish scavengers, and fish beggars. There is also a never ending fire here west of the fishing spot, which is popular among free to play players for quickly cooking caught fish.

To the east of Peksa's Helmet Shop is a small house with a spinning wheel. Players here can turn wool into balls of wool. Or, if a player is a member, can spin flax.

To the south of the house with the spinning wheel is a house with a potter's wheel. Players can use clay with this and the pottery oven nearby to craft small items. In the free worlds, this is the only location of the potter's wheel and oven outside the Crafting Guild.

The Barbarian Village mine is a very small mine located at the centre of the village. Coal and tin are the only ores that can be obtained from the rocks.

In the house containing Tassie Slipcast, there is a Barbarian anvil that members may use to smith Hastae after completing Barbarian training.

Reached through a hole located in the mining area, the Stronghold of Security, new from 4 July 2006, is open to all players, members or free-to-play. It is a medium-sized dungeon that gives rewards for making it to the centre of each level. Various monsters live in them including goblins, minotaurs and skeletons.