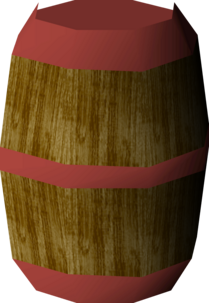 Barrels are found in the Viyeldi caves during or after the Legends' Quest. Smashing them will reveal a random item, a random monster, or both.

The success of opening the barrel is dependent upon Attack levels. By selecting the 'smash' option on a barrel, one (or more, in some cases) of the following can occur:

After a barrel is opened, it will respawn in a random location in the room.