The Barrows minigame is an area-based combat minigame released on 9 May 2005. The minigame is named after the six burial mounds in which the Barrows brothers were entombed after their deaths during the Third Age.

During this minigame, players attempt to rob valuable items from the Barrows brothers' crypts. However, due to an ancient spell, the brothers' wights continued to dwell in the barrows, protecting these treasures.

Barrows is a popular minigame due to the potential of receiving valuable rewards, including the unique Barrows equipment. The objective is to defeat the six Barrows brothers and open the rewards chest.

The Barrows brothers were ancient warriors of Saradomin who established a reputation of near invincibility while fighting in the God Wars.

They launched a massive attack, known as the Morytania Campaign, to liberate Morytania from the clutches of Lord Lowerniel Vergidiyad Drakan and his vampyres. As the brothers departed, a mysterious stranger granted them superhuman power to battle Drakan's forces, by supplying them with the weapons and armour now known as the Barrows equipment. It succeeded, for the brothers, who were in the front line, seemed invincible. They had not anticipated, however, that the stranger had ulterior motives for helping them.

As the brothers and their accompanying army progressed further into enemy territory in Morytania, the stranger followed them until the brothers became weakened. The brothers were grievously wounded in battle near the Great Vyrewall, and thus the army set up camp just west of Meiyerditch. Soon, the brothers died of their infected wounds simultaneously in the army's camp. The army quickly decided to retreat from Morytania, realising they could never succeed without their former leaders' prowess, but as a reflection of the brothers' bravery, they vowed to honour their martyred heroes as a final act before retreating.

The army spent six days and nights holding off the attacking vampyres to construct burial mounds, the Barrows, to honour the fallen brothers.

As the army began its return, the stranger slowly started walking towards the brothers, now dead and interred in their barrows. Arms outstretched atop the central mound, the stranger chanted in some foul, ancient language, casting his old magic. A vulgar purple light formed in front of him, fell to the earth, and bled into each of the barrows.

Not many of the original army made it back on the journey home, but tales were told of how each night an unnatural glow could be seen on the horizon where they had buried the brothers. Even today there are stories told about those mounds of earth, and of the sights and sounds that have been witnessed nearby.

A crumbling tome, obtained by searching the hut near the mounds or by talking to the Strange Old Man found digging the crypts, provides a detailed account of how the brothers came to be buried. 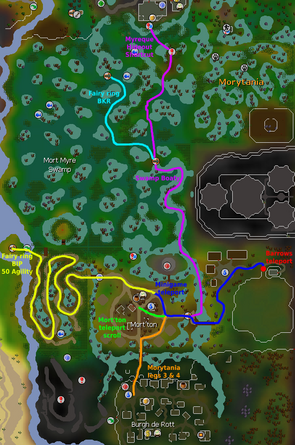 1. (Red) Using the Barrows Teleport (tab) is the quickest route.
2. (Blue, Green and Orange) Using the Mort'ton minigame teleport, Mort'ton teleport scroll and Morytania legs 3 & 4 are good alternatives to players who don't have access to the Barrows teleport.
3. (Pink and Light blue) Travelling using the Swamp Boaty is a valid method for ironmen who don't have access to abovementioned options.
4. (Yellow) Using the BIP fairy ring is the longest of the routes, but takes the player close to the Nature Grotto, which players can visit to restore their prayer points.

The table below lists the possible rewards of the Barrows minigame. For more information about reward mechanics and rarities, visit the rewards chest's page.