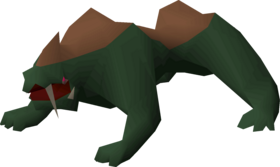 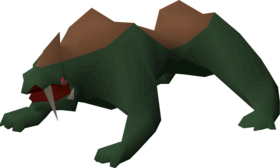 A basilisk is a Slayer monster that requires a Slayer level of 40 to kill. Like cockatrice, players must equip a mirror shield or V's shield when fighting these monsters. Players require a Defence level of 20 in order to receive basilisks as a Slayer task, as this is required to wield the shield. To get a basilisk task from Duradel, Nieve, or Konar, players must have also purchased the "Basilocked" slayer reward, costing 80 points. Basilisks have below-average accuracy for their level, but have high Defence. They are weak to crush attacks, so weapons such as the Leaf-bladed battleaxe and the Dragon mace are unusually strong if using melee. The Dragon mace is generally around the same damage per second as the Dragon scimitar, while the Leaf-bladed battleaxe is approximately 5% greater damager per second than either.

Without the mirror shield, the player's combat stats will be greatly reduced with each hit. The Protect from Melee prayer can be used against the damage, but the stats will still be lowered.

Basilisks are a good source of runes. Due to their high drop rate of nature runes, it can be useful to bring a Staff of fire or kill some pyrefiends to the east in order to use High Level Alchemy on their frequent metal armour and weapon drops.

These can be safespotted from the southern entrance to their area in the Fremennik Slayer Dungeon, by using the south-east wall to stop their movement. This does not remove the need for a mirror shield, as their drain attack is ranged. Other safespots are available using the rocks on either side of the room, getting the Basilisk stuck on the other side of the rocks/pebble. Note that players cannot set up a dwarf multicannon within the dungeon.

Drop rates estimated based on 48,470 kills from the Drop Rate Project, unless otherwise cited.