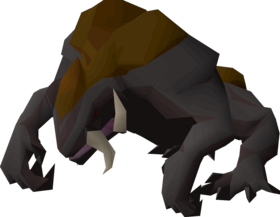 Basilisk Knights are a Slayer creature that can be found in the Jormungand's Prison beneath the Island of Stone, requiring level 60 Slayer and completion of The Fremennik Exiles to kill. Like cockatrice and basilisks, players must equip a mirror shield or V's shield when fighting these monsters or they will take heavy damage and their stats will be drained.

The basilisk knight has an improved drop table from regular basilisks, and can drop the basilisk jaw, which can be used to upgrade the Helm of Neitiznot to the Neitiznot faceguard.

Players cannot use a dwarf multicannon on Basilisk Knights, as the only places players can place a cannon in the Jormungand's Prison are those which contain dagannoth.

Drop rates estimated based on 348,500 kills from the Drop Rate Project, unless otherwise cited.

When on a slayer task, the average Basilisk Knight kill is worth 26,057.

When not on a slayer task, the average Basilisk Knight kill is worth 8,836.

There is a 3/52 chance of rolling the useful herb drop table.

There is a 8/52 chance of rolling the gem drop table.