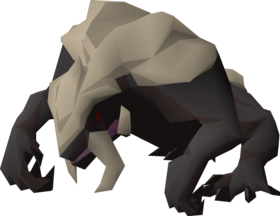 The Basilisk Sentinel is a superior variant of a Basilisk Knight. It has a chance of spawning when a basilisk knight is killed if the player has purchased the unlock Bigger and Badder for 150 Slayer reward points from any Slayer master.

Similar to their lower-level counterparts, a mirror shield or V's shield is required to safely engage them, as otherwise the player will take rapid damage and have their stats drained.

Along with its magic and melee attacks, it has a special attack in which they shoot a pale-red coloured orb at the tile the player is currently standing on; if players do not move, this will encase them in stone, preventing players from attacking for a few seconds. This can be avoided while the orb is in flight by moving one square away, or by spam-clicking away to break free, similar to the fight against The Jormungand. Having Auto Retaliate on makes the player automatically break free from the special attack if hit. The special attack seems to have a cooldown of ~30 seconds, beginning with their first attack. They may not immediately use it when it's off cooldown, however.

Drop rates estimated based on 348,500 kills from the Drop Rate Project, unless otherwise cited.

The average Basilisk Sentinel kill while on a Konar task is worth 74,282.2.

There is a 3/52 chance of rolling the useful herb drop table.

There is a 8/52 chance of rolling the gem drop table.