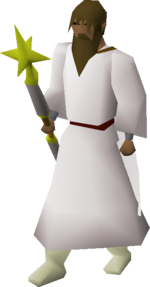 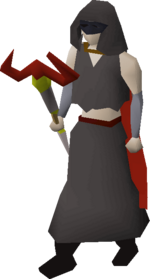 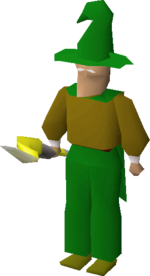 Battle mages are magic-users found in the Wilderness Mage Arena. They appear in the arena itself, and their primary function is to battle the player, thus allowing the player to cast their chosen god spell 100 times on any of the mages in order to be able to use the spell outside of the Arena.

Battle mages come in three types; Saradominist mages, who carry Saradomin staves and have an appearance similar to the Seers in Seers' Village, Zamorakian mages, who appear pale and cloaked, bearing similarities to Highwaymen and carry Zamorak staves, and Guthixian mages, who are gnomes and look akin to Gnome mages who ride the backs of Tortoises in the Battlefield.

The maximum hit of the mages is quite high for their level, and the Protect from Magic prayer is recommended when battling them. However, for people with higher magic and defence (80+ and 70+ respectively recommended), it might be more economical to use food. Their aggressiveness depends on the type of god cape a player wears; mages are not aggressive to players wearing their God's cape.

Additionally, wielding a Void knight mace whilst wearing a non-Guthix cape such as the Saradomin cape or Zamorak cape will cause only one type of Battle mage to be aggressive towards players at any one time. However, this is generally not a concern as it is not a multicombat area.