The Battle of Uzer was a conflict that occurred in roughly the Year 3669 of the Third Age.[1] It was amongst the largest battles of what would become known as the Kharidian Desert Campaign. The battle was fought primarily between the forces of the desert city of Uzer and the military of the Zamorakian Elder-Demon Thammaron.

During the early Second Age, Uzer was a fairly small town with little military fortification.[2] By the late Third Age, however, the city had become one of the desert's largest, surpassed only by Ullek. As the God Wars developed, military golems were programmed to defend the city. When Thammaron launched a siege on the city, these golems were its primary military force, who were aided by the Order of the Slayer Masters, then a newly formed organisation; this was their first major conflict. It seems that the entire Golem force was annihilated, with the exception of one.

Thammaron's forces were initially victorious, but Thammaron, who had fled back to his demonic realm through a portal in the now ruined Temple of Uzer, later died of his wounds sustained during the battle. Palkeera had helped to secure Thammaron's flank as he tried to retreat, but she was gravely wounded as well, and slipped into the Shadow Realm. A group of priests later closed the portal.

With the exception of a single clay golem, virtually all of Uzer's settlers either fled or were killed in the attack. The destruction of Uzer alerted the nearby city of Ullek to the threat of invasion, which may have helped its inhabitants to flee to Sophanem following the Battle of Ullek. 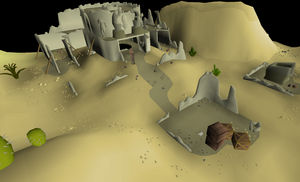 The remains of Uzer