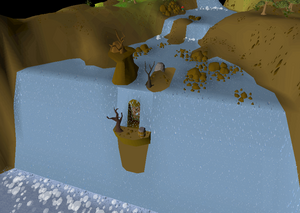 The Baxtorian Falls is a small series of water rapids flowing southwards from the Lunar Sea which are featured in the Waterfall Quest. It is also located at the start of the River Dougne. The Baxtorian Falls are a part of the Kingdom of Kandarin and is north-west of Ardougne and east of the Tree Gnome Stronghold. Under the rapids is the Waterfall Dungeon, which is also heavily featured in the Waterfall Quest. At the top of the Falls there is a dock leading up to a whirlpool. Players who have completed the required portions of Barbarian Training can jump into this whirlpool where they will be swept down to the entrance of the Ancient Cavern.

The easiest access to the Baxtorian Falls is to use a Games necklace teleport to the Barbarian Outpost, then run south (To enter the Baxtorian Falls dungeon, you must have a rope and Glarial's amulet with you). Board the raft located next to Almera's house. It will crash onto a small island down the river, then use your rope on the rock on an adjacent island. Finally use a rope again on the dead tree to rappel down to the dungeon entrance.

Players with level 20 or higher Agility can run from Seers' Village west past the Coal Trucks mine and through the fence where the Dwarf Cannon quest starts. Otherwise, players can reach the falls by running from Ardougne or Seers' Village past the Fishing Guild. Alternatively, players who have their house at Rellekka, or who have access to Rellekka tablets, can teleport to Rellekka POH portal and run to Baxtorian Falls via the Lighthouse peninsula.

A non-player merchant known as Rasolo can be found south of here, just east of the information centre. He sells a wide variety of things, but at exactly twice the price of its home shop.

The Baxtorian Falls have grown in popularity largely due to the attractions of the Waterfall Dungeon, the Ancient Cavern, and Barbarian Training. The Waterfall Dungeon has always been a very popular training area for players wishing to kill fire giants, while many other players come to the falls to go through Barbarian Training and gain access to the Ancient Cavern, where the powerful mithril dragons and brutal green dragons reside. Also, a few people occasionally practice high alchemy here simply to take a break from fighting due to its relative beauty.

Also notable are the unique fishing spots on the western side of the falls where players can catch leaping fish with a Barbarian rod. With a knife, player may cut the fish for offcuts, roe, or caviar, which can be used to make potion mixes. Also, it provides the fastest Fishing experience in the game.