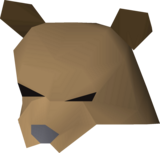 A Bearhead is a piece of low level headgear that is obtained after killing The Kendal during the Mountain Daughter quest.

If lost before completing Mountain Daughter, another can be obtained in the Kendal's cave. If the quest is completed, it can also be reclaimed by speaking to Hamal the Chieftain. Players can also reclaim it from Perdu for 10,000 should they lose it. 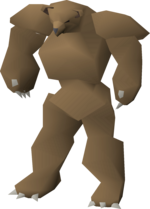 The bearhead resembles the historical version of The Kendal.
Retrieved from ‘https://oldschool.runescape.wiki/w/Bearhead?oldid=14233405’
Categories: