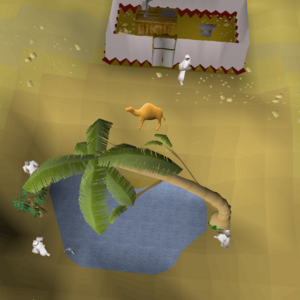 The Bedabin Camp is a very small nomad camp south-west of Al-Kharid and the Kalphite Lair. It is visited during the Tourist Trap quest and is the starting point of the Desert Treasure quest. The Bedabin Camp is also a destination that can be flown to using the Magic carpet transportation system from the Shantay Pass. Alternatively, fairy ring code BIQ will teleport the player to the entrance of the Kalphite Lair, north-east of the camp.

The Bedabins are known as a peaceful tribe of desert dwellers, and are often nicknamed "Tenti's" because they live in tents. They are renowned for surviving in harsh desert climates, and also for growing the delicious Bedabin ambrosia, or Tenti pineapple. The pineapples are grown in a secret location in order to stop thieves from raiding them.

Besides these quests, the Bedabin Camp is rarely visited by players, mostly as part of Treasure Trails, or as a stopover on their way to the Bandit Camp, a very popular training place amongst high levelled players. It is inhabited by Bedabin Nomads who sell certain desert supplies and Bedabin Nomad Fighters. Apart from the many desert supplies merchants in the camp, there is little else to do except kill Bedabin Nomad Fighters. Notable NPCs are Al Shabim, leader of the Bedabin nomads, archaeologist Asgarnia Smith, and a Bedabin nomad guard protecting the entrace to the northern tent. The anvil in this tent can only be used during the Tourist Trap quest in making darts and is not allowed to be used after the quest.