The beekeeper runs an apiary west of Catherby and south of Seers' Village, next to a flaxfield. He will tell players all about his bees and beehives, and explain how to obtain buckets of wax as well as its uses. He tells players that they are welcome to take as much wax and honeycombs as they want, and gives them some insect repellent to aid in doing so.

He appears to be somewhat obsessed with his bees, and warns players to leave them alone, as they belong to him. He makes a bee related pun when players say goodbye to him, telling them to 'bee' good.

During Troll Romance, he assists the player in obtaining the beeswax to wax the sled with. 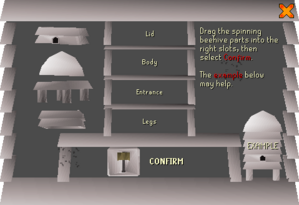 The bee keeper is involved in a random event. He teleports players to a field of beehives and requests help to repair a broken beehive. Players have to assemble the beehive from its four main parts by clicking on them and moving them into their place marked in the centre of the screen. After positioning a piece, they have to select another and repeat the process until the beehive is completely repaired. After all the pieces are placed, they have to click the 'build' button at the bottom of the screen to finally assemble the hive.

The key to repairing the beehive is to make sure each of the four pieces "rests" on the shelf it sits on. Each of the hive parts has multiple possible positions that seem to fit within the shelves, but only if the hive part is in the lowest position, it gets accepted.

The event can be left before completion by talking with the beekeeper, this however grants no rewards.