From Old School RuneScape Wiki
Jump to navigation Jump to search
The RuneScape Wiki also has an article on: rsw:Beekeeper
This article is about the random event. For the NPC, see Beekeeper. 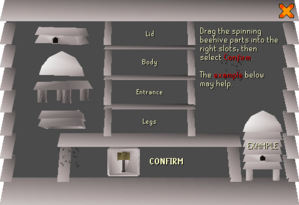 The Beekeeper is a random event in which the Bee keeper teleports players to a field of beehives and requests help to repair a broken beehive. Players have to assemble the beehive from its four main parts by dragging them into their places marked in the centre of the screen. After all the pieces are placed, they have to click the 'build' button at the bottom of the screen to finally assemble the hive. The player is allowed six attempts to complete this (formerly only a few).

The event can be left before completion by talking with the beekeeper, this however grants no rewards.

The average Beekeeper event reward is worth 92.5.