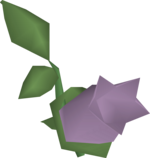 Cave nightshade is used in Herblore to make Weapon poison(++) along with poison ivy berries and coconut milk. This requires level 82 Herblore.

Players can eat cave nightshade, but this is not recommended in most situations. When eaten, the player will say, "Ahhhh! What have I done!" and take up to 15 damage (damage taken scales with the player's current Hitpoints), but as with most self-damaging items it is impossible for the player to kill themselves with it. (Note: It is possible for players to eat this without losing health — if the player were to accidentally eat the nightshade, they can teleport away to avoid losing any Hitpoints, provided they don't click "continue" on the dialogue text.)

There are two spawns in the Skavid caves by the ogre city Gu'Tanoth south of Yanille: the northern-most cave entrance, just south of the western entrance to Yanille, and the southern-most cave entrance within the city of Gu'Tanoth across a bridge. The Skavid map (obtained during the Watchtower quest) and a light source are needed to enter these caves. These spawns can be picked up without wearing gloves or gauntlets, and respawns about every 54 seconds. Collecting a cave nightshade from one of these spawns is a task in the Medium Ardougne Diary.

Cave nightshade may also be grown using the Farming skill. Players with 63 Farming can plant belladonna seeds at the patch near Draynor Manor to grow cave nightshade. This grants 92 Farming experience for planting it, and 512 experience for harvesting it. In order to harvest cave nightshade, the player must wear gloves or gauntlets; otherwise, the player won't be able to pick any and will suffer 2 damage if they try (this appears as a poison hitsplat but it is really just normal damage). One seed can produce a minimum of 3 nightshades, with the maximum scaling with the player's Farming level, much like limpwurt roots. If the player's inventory becomes full from harvesting, excess nightshade will not be dropped on the ground as it would with other produce.[1] The Tool Leprechaun will not note nightshade.

Planting a belladonna seed and harvesting it is a task in the Hard Lumbridge & Draynor Diary.

Although the cave nightshade is untradeable, it is an ingredient to make a tradeable potion. Therefore, it has a theoretical value of 3,071 when buying coconut milk and poison ivy berries and selling the resulting weapon poison(++).