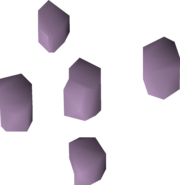 A Belladonna seed is used in Farming, and grows into cave nightshade. Players can only plant it in the belladonna patch, which is located at Draynor Manor. They require level 63 Farming to plant the seed, and players gain 91 experience for planting it and 512 experience for successfully harvesting it. The minimum yield is always three, but a higher Farming level increases the potential yield, similar to limpwurt roots. If the player's inventory becomes full from harvesting, excess nightshade will be dropped on the ground. Tool leprechauns will not be able to exchange the produce for banknotes, as cave nightshade is untradeable.

There is no nearby gardener that will watch over your growing belladonna plant. However, a Tool leprechaun can be found next to the patch. It will take 5 hours and 20 minutes to grow.

Farmers must pick nightshade with gloves equipped, or they will be hit for 2 poison damage instead of harvesting the nightshade. Certain decorative gloves, such as Mime gloves, do not work safely. Some other items that go in the hand slot also work, like the Regen bracelet.

It can be pickpocketed from Master Farmers.

Harvesting cave nightshade is one step in the hard Lumbridge & Draynor Diary.