Below Ice Mountain is a free-to-play quest that revolves around aiding an 'archaeologist', Willow, who seeks to open an ancient set of doors leading into the western side of Ice Mountain. The player needs to assemble Willow's old team, which is capable of opening the doors and gaining entry to what lies beyond...

{"requirements":"*<span class=\"scp\" data-skill=\"Quest points\" data-level=\"16\">[[File:Quest point icon.png|21x21px|link=Quest points|alt=Quest points]] 16 [[Quest points]]</span>","desc":"Willow, an energetic archaeologist (perhaps suspiciously so) is hunting for her next big discovery. She believes she has found the entrance to ancient underground ruins found to the west of Ice Mountain. There's a catch though - the entrance is sealed tight and she needs to re-unite her old crew to help her break in. Naturally, she has to stay close to the ruins in order to lay claim to the find, so it falls to you to bring her rag-tag group back together for one last caper and a final big pay-off.\n\nBurntof is an old dwarf with a penchant for demolition, Checkal is a well-built lifter of heavy things and Marley is a cunning thief with a knack for disarming traps.\n\nTogether, they have the talents it will take to gain entry to the secret ruins. But persuading them might not be easy. See, the gang aren't all too keen on working with Willow again, and her intentions might not be as honourable as she claims...","difficulty":"Novice","kills":"[[Ancient Guardian]] ''(level 25)'' ('''Note:''' You can skip the fight with a [[pickaxe]] and <span class=\"scp\" data-skill=\"Mining\" data-level=\"10\">[[File:Mining icon.png|21x21px|link=Mining|alt=Mining]] 10 [[Mining]]</span> <sup>(<span title=\"This requirement is boostable\" style=\"cursor:help; text-decoration: underline dotted;\">boostable</span>)</sup>)","name":"Below Ice Mountain","start":"[[Willow (Below Ice Mountain)|Willow]] on the path south of [[Ice Mountain]]","length":"Short","items":"* [[Cooked meat]] (can be obtained during the quest)\n* [[Bread]]\n* [[Knife]]\n* [[Beer]] (can be obtained during the quest)\n** Alternatively [[Asgarnian ale]], [[Dwarven stout]], or a [[Wizard's mind bomb]]"}

Speak to Willow, north east from Falador and south of the Dwarven Mine entrance by Ice Mountain. A self-proclaimed "archaeologist", she will tell the player that she has found a set of doors beneath a tonne of rocks, and asks you for help, as she cannot leave the area in fear of another "archaeologist" claiming the credit for her discovery.

Agree to help Willow, and she'll need you to convince her old "excavation team" to help her, since they had a falling out with Willow. Her mates, Burntof, Checkal, and Marley, can be spoken to in any order. 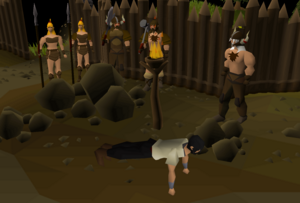 The trials of the strongman.

Speak to Checkal. He will refer you to Atlas, who will agree to train you. A long cutscene of training regimens will ensue, and the player will unlock the Flex emote after the cutscene. Before returning to Checkal, grab a beer and meat from the table if you have not obtained it already.

Return to Checkal and use the Flex emote when prompted, and he will agree to help Willow.

Items needed: 3 coins or a beer

Burntof, a master with explosives, can be found in the Rising Sun Inn in Falador. Drunk as he is, he will ask the player for a drink. If the player has not already picked up the beer from Barbarian Village, purchase one from the bartender and give it to Burntof.

Though Willow instructs the player to speak to Charlie the Tramp to find Marley's whereabouts, the player can skip this conversation and directly reach Marley in the Edgeville ruins, by the yew trees south of Edgeville bank.

He will want a steak sandwich from the Blue Moon Inn in order to help Willow. However, he was banned from the inn and the cook won't make him another one. Thus, the player must go to the inn in his place.

Speak to the cook in the east room of Blue Moon Inn in Varrock. Though he will still refuse to make a steak sandwich due to him trying to steal from one of their patrons, he will tell the player the "delicate art" of creating a steak sandwich; using a knife on cooked meat while having bread in your inventory.

With the steak sandwich beautifully and masterfully created, return to Marley with it in your inventory. He will now agree to help Willow.

The Ruins of Camdozaal[edit | edit source] 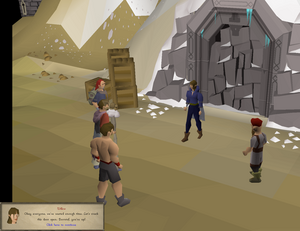 The crew assembled prepares to enter.
Items needed: Some food for low combat players, and any pickaxe or a weapon and armour to kill a level 25 monster

With the crew assembled, head to the ancient doors at the west side of Ice Mountain (marked by the dungeon icon on the minimap), and talk to Willow. The crew will begin unblocking the entrance, with Burntof blowing up the rocks, Checkal moving the debris, and Marley disabling the traps within. 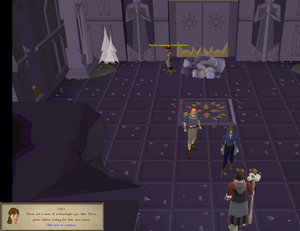 Willow's treachery is revealed, whilst Burntof finds the ruins rather familiar.

Though you become fascinated at the potential historical value of the ruins, Willow reveals to you that they are not actually archaeologists, but grave robbers hoping to find valuable loot. Now that you know, she can't risk you revealing them to the authorities and prepares to kill you. However, Burntof accidentally sets off a trap, awakening the Ancient Guardian. Having bit off more than they can chew, the four team members flee. 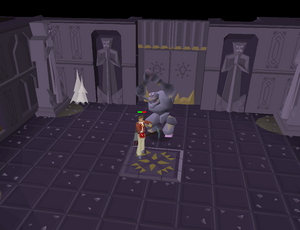 After the cutscene ends, kill the level 25 Ancient Guardian. Players can choose to kill it through standard combat, but lower levelled players are recommended to mine the four structural pillars in the corners of the room; this will cause some rocks to fall down, damage the golem and ultimately kill it. When using the mining method, the Guardian will constantly hit the player, so bring enough food. Alternatively, the guardian can be safespotted by hugging the east wall by the ruins exit.

After defeating the golem, the player will loot some items from Willow's bag, which she left behind in a panic. However, the doors leading deeper into the mountain open, revealing a dwarf named Ramarno. Being one of the few Imcando dwarves to have survived the Runecrafting Crusades, Ramarno has since lived inside these ruins: the Ruins of Camdozaal. 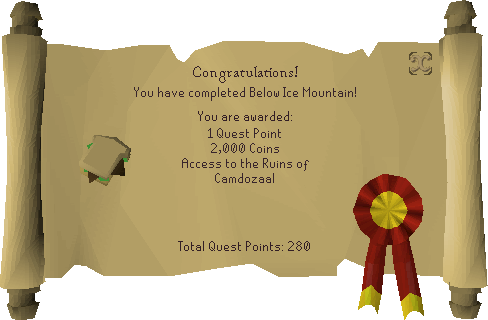 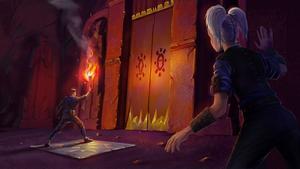 A piece of official artwork of the quest, showing the player in the Ruins of Camdozaal. 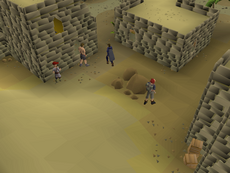 The gang laying low in Nardah after the quest.
Retrieved from ‘https://oldschool.runescape.wiki/w/Below_Ice_Mountain?oldid=14311649’
Categories: