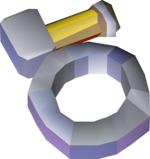 The berserker ring is one of the Fremennik rings and is dropped by the Dagannoth Rex in the Waterbirth Island Dungeon. The Fremennik rings are some of the very few rings in RuneScape to give stat bonuses, and the berserker ring is considered to be the best ring for melee users. The ring is particularly coveted alongside the brimstone ring, as it is one of two rings that provide a strength bonus.

In general, it is more commonly used than the other melee rings as it raises their maximum hit. An exception to this is the tyrannical ring, which is usually preferred over the berserker ring when using the dragon warhammer's special attack due to the fact that the special attack will only reduce the opponent's defence if it hits. Another ring that may be better in some situations is the ring of suffering, which in addition to its defence bonuses can end up dealing more damage (via recoil) than the berserker ring could achieve, such as against Kalphite Queen and General Graardor.

This ring is favoured by player killers who tend to maximise their strength bonus instead of their accuracy.

It can be imbued using 650,000 Nightmare Zone reward points, 260 Soul Wars Zeal Tokens, or a Scroll of Imbuing, purchased for 200 PvP Arena reward points, which doubles its bonuses.