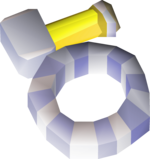 It is commonly used in melee setups because the strength bonus raises maximum hit, which is generally more beneficial than accuracy for DPS against targets with low defence. The berserker ring and brimstone ring are the only rings that provide a strength bonus.