From Old School RuneScape Wiki
Jump to navigation Jump to search
The RuneScape Wiki also has an article on: rsw:Between a Rock...

Between a Rock... is a quest about helping the old dwarf Dondakan, who is trying to access a legendary gold mine south of Keldagrim, but is unable to penetrate inside.

The cave entrance to Keldagrim.

Start the quest by going to the Keldagrim mines (fairy ring code dks), which can be found north-east of Rellekka (you can use the enchanted lyre for easy access, or, if your house is in Rellekka, you can also teleport there). Once you've entered the cave, there will be a crack between two dwarf statues directly across from you, which you should enter. From there, talk to the Dwarven Ferryman (not the boatman) for a ride across the river, which will cost 2 coins or be free if you have a ring of charos (a) equipped. If you instead take the minecart from the Grand Exchange, go north-west from the carts to the Dwarven Boatman and take the boat (free) to reach the Ferryman at the entrance. (Alternatively, if you have access to Blast Furnace or have completed Ratcatchers, you can use the Grouping interface.) After crossing the river via the Ferryman, the quest can be started to your north.

Go east and around the rock wall until you reach and cross the bridge west of you that leads to Dondakan's Rock. Speak to Dondakan to begin the quest. The necessary conversation options to do so are as follows: 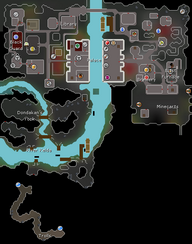 The dwarven boatman and ferryman are south of the River Kelda at the docks. Dondakan can be reached via the ferryman and going north.

Dondakan will then ask you to get further information about the rock and tell you to talk to the Librarian. Return to the other side of the river, paying 2 coins again or crossing for free with the ring. This time, speak with the Boatman to be taken to Keldagrim. If you have not started The Giant Dwarf, you will be presented with a small cutscene introducing the area. You will then be taken by guards, giving you the option to start The Giant Dwarf.

You can talk to the Librarian on the Western side of Keldagrim, but it won't do much other than specifying who to speak with. Instead, go into the western part of the Trading Consortium. Look for the area with an anvil on the minimap in the palace and speak with the engineer inside of the room it's located in. (This is located within the large building NOT the anvil which is further west)

You will be told to speak with Rolad located in the eastern building at the Dwarven Mine entrance camp next to Ice Mountain. To get there, either teleport to Falador or the Monastery and walk the distance, use Ancient Magics to teleport to Lassar, or take the mine carts located in the south-eastern portion of Keldagrim for 150 coins (75 coins if you have the ring of charos (a)). If you took the carts, head south, east, then north and exit the mine.

Rolad is inside the eastern house at the camp. He will ask you to find the pages from a book giving you information about the rock.

Note: Make sure to fully complete the dialogue otherwise the pages won't appear.

Between the pages[edit | edit source]

All three pages are found in the Dwarven Mine. Note that the pages may require multiple attempts to be obtained:

Return to Rolad when you have found all three pages, and he will give you the Dwarven lore. When you have the choice, you can answer "Of course," or lie to him and keep it. Read the book, and keep it for later.

If you need a cannonball mould, purchase it from Nulodion in the western house next door to Rolad.

Head back to Dondakan using one of the methods first used to reach him and speak with him until you get a short cutscene where he kicks the rock to no avail. He then tells you that he wants a material that is stronger than runite and granite. This is where your gold bars come in handy. Show him your gold bar by using it on him.

Note: You can also show him a gold ore instead. If you have forgotten to bring one, there is a mineral vein with gold in the cave south of Dondakan's.

Go to any furnace with a gold bar (you only need one cannonball, the other three bars are for the helmet later; if you want a trophy cannonball in your bank, do not make multiple cannonballs at once with the drop trick since your character can only carry one at a time, the only way to carry more than one gold cannonball is to telegrab the cannonballs you dropped one by one.) and your cannonball ammo mould, and make a golden cannonball. The closest furnace on foot is the one in Rellekka, which you can use if you have completed The Fremennik Trials. However, it's much quicker to teleport. You can also find a furnace at Zanaris. Another option is to take the fairy ring to Edgeville, or head back to the mine carts in South-east Keldagrim and take Cart 3 to the Grand Exchange; then, use the furnace in Edgeville by using the shortcut from the Grand Exchange to Edgeville (21 Agility required). You can also use an amulet of glory to reach Edgeville, and take any above given option to return to Dondakan. Teleport to Falador also puts you a few steps from a furnace.

When you are finished, give (by using it on him) the cannonball to Dondakan. When he fires it, the cannonball will disappear through the wall. He will then ask to fire you through the wall, but he needs the schematics in order to change the cannon to be able to fire a human. You will also need to make yourself a gold helmet (requires 50 Smithing) if you don't want your head to explode when you hit the wall.

Tip: Smithing a golden helmet in the Resource Area is a medium Wilderness Diary task.

There are a set of four (4) schematics:

Once you have all schematics, click 'assemble' on the one Dondakan gave you. You will be shown all schematics, but they will not make any sense. What you must do here is move the schematics one by one so that they fit with the original schematic. Select and show one at a time, rotate and move them to fit. It may be easiest to use the human stick figure legs, torso, and head to position each of the pieces correctly. This part should be quite simple. Be aware that even if you move the pieces in the correct relative position, you might need to select them all and move them together to the correct position on the screen. Once you put them all in place, the screen will show: "That's it! It all makes sense now! If you were a dwarf, that is...". 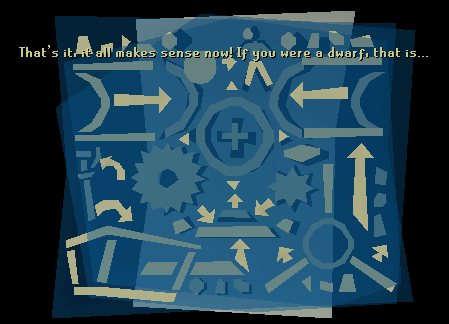 Travel back to Keldagrim, bank, get combat gear, a pickaxe, and if needed, go back to the engineer in the Trading Consortium so that you can make your helmet by using your remaining (3) gold bars on the anvil if you haven't made it already.

Equip the golden helmet; make sure you have a pick because any gold ore in your inventory will disappear. Go back to Dondakan with the schematics and the items needed to kill the level 75-125 enemy. Once you are ready, ask Dondakan to shoot you into the rock.

Riddle of the rock[edit | edit source] 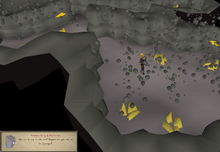 To fight the Arzinian Being of Bordanzan, you will need to mine at least six (6) gold ore. Otherwise, it will keep regenerating its hitpoints. Mining 15 pieces of gold is highly recommended as this will lower the combat level of the boss from 125 to 75. Make sure you keep this gold in your inventory. You only have eight (8) minutes to mine the gold and defeat the avatar; if you take off your gold helmet, you will be teleported back to Dondakan.

Note: Mining a gold rock here will grant you the achievement for the Medium Fremennik Diary. You will not need to revisit the mine after the quest. 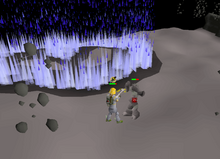 You can use Prayer for an easy fight; the spirit shouldn't take too long to kill. If you are close to dying, you can take your gold helmet off, which will teleport you outside of the rock, next to Dondakan.

When you have defeated the spirit, you will be teleported back out of the rock. Speak to Dondakan to finish the quest.

Tip: If you plan on obtaining the Music cape, re-enter the mine to unlock the song In Between. 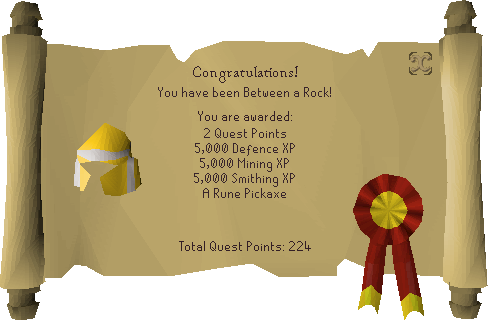 Completion of Between a Rock... is required for the following: