From Old School RuneScape Wiki
Jump to navigation Jump to search
This article is about discontinued Wyson nests. For other bird nests, see bird nest. 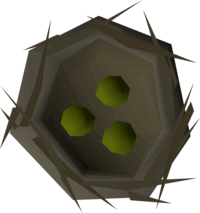 The discontinued bird nest from Wyson was an old variant of the Wyson seed nest obtainable before an update on 18 February 2016. After this update, the existing nests were discontinued, and newly obtained nests would instead be a different variant. All nests previously obtained would remain in banks and inventories, and the new nests obtained would provide better rewards. This change was made to prevent players from obtaining large quantities of the better seeds immediately after the update occurred.

The second variant was also later discontinued with the release of the Farming Guild in 2019, when the current variant was introduced.

Like the current version of bird nests, they were obtained from Wyson in exchange for mole claws and mole skins.

This nest is visually different from the other seed nests, because the rotation of the image was updated to be more top-down. This was likely a mistake, because the x-value of the rotation was changed to 453 with the same update that changed other nest values from 20 to 453.