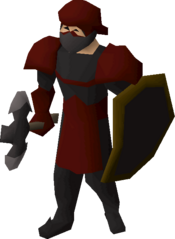 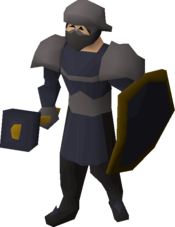 Black Guard Berserkers are located in the western half of Keldagrim, where they guard the headquarters of the Dwarven Black Guard. Here they guard key dwarven figures such as Commander Veldaban and Supreme Commander Bisi.

Black Guard Berserkers are amongst the city's finest warriors, and are key assets in policing the city and defending against the many trolls that inhabit in the nearby caves and mountains.

Wielding powerful battleaxes and warhammers similar in power to runite, Black Guard Berserkers should not be underestimated. Despite their somewhat low combat level, they have a surprisingly fast attack rate of 3 ticks and can deal up to 13 damage, so Protect from Melee is advised.

Drop rates estimated based on 1,683 samples from the Drop Rate Project, unless otherwise cited.