The Black Knights are up to no good. You are hired by the white knights to spy on them and destroy their secret weapon.

Getting the required items[edit | edit source]

First, get the items. Grab a cabbage from Edgeville Monastery near the Black Knights' Fortress or at the cabbage patch in the farm south of Falador (cabbage taken from Draynor Manor will not work; you will find out why during the quest), buy a bronze med helm from Peksa in Barbarian Village (or get one in the backroom of Draynor Manor), and buy an iron chainbody from Wayne's Chains in Falador. If your Smithing level is high enough (3 for the bronze medium helmet, and 26 for the iron chainbody), you can just smith the chain and the helmet. If not, you'll have to buy them from the shops listed above or buy them from the Grand Exchange.

Talk to Sir Amik Varze, who can be found on the 2nd floor[UK]3rd floor[US] west wing of White Knights' Castle in Falador. He will tell you that he needs a spy. He wants you to spy on the Black Knights for him at their fortress located just North of Ice Mountain near Edgeville. He wants you to find out what their new weapon is and destroy it. A free inventory space is needed for a dossier handed to you by Sir Amik Varze. Note: The dossier will self-destruct once you read it, signifying the start of the quest.

Items required: An iron chainbody a bronze med helm and a cabbage not from draynor manor.

The fortress is due northeast of Falador and slightly west of the Monastery.

Make your way to the Black Knights' Fortress. It is northeast of the Dwarven Mine and the Oracle, northwest of the Monastery. Run through the Black Knights, as they will attack you because they are naturally aggressive. Enter the door to the south surrounded by guards. Make sure you are wearing the Iron chainbody and the Bronze med helm (you may wear armour in the legs, cape, shield, gloves, boots, and amulet slot for extra protection, but the body and head slot must be the iron chainbody and bronze med helm), or they won't let you enter.

In this small room, there will be a grill. Click on it to listen. You will hear a conversation between the Black Knight Captain, a witch and a goblin.

If you are at low health from any previously encountered Black Knights, you can go to the Monastery located East of the Black Knights' Fortress and speak to a Monk to heal you. 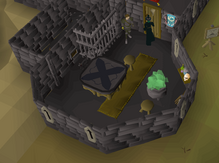 Follow the ladders back to the room with the false wall, and try to open the door to the east where many Black Knights are walking around a table. You will be stopped from opening the door, since a guard will talk to you. You may have to kill an aggressive black knight in the room before you can complete the dialogue. He will say that there is an important meeting going on and they'll kill anyone who gets in. Say you don't care and that you're going in anyway.

Note: You could use the "talk-to" option to freeze a guard from moving, allowing you to trap the black knight behind him. This way, you can kill him with magic easily, or likely just go through the door after having him behind a guard linearly to the door.

Run from the knights and climb up the ladder on the northern wall of the room. Walk east and south and look for a wall you can push. Push the wall to see a hole. Right-click your cabbage so that you do not eat it, and use it with the hole that should be in the room. You will hear the witch say that her weapon is destroyed. If you just accidentally ate your cabbage, another can be found in a patch near the Edgeville Monastery

Return to Sir Amik Varze, and tell him you sabotaged the weapon. When he is done talking, you will have finished the quest, and have received your award. 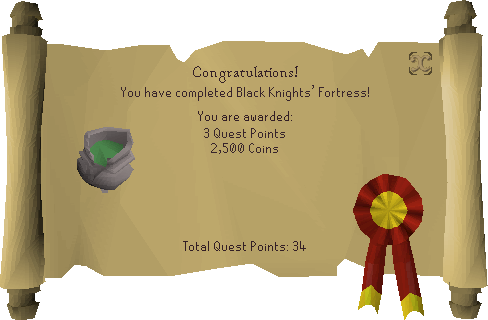