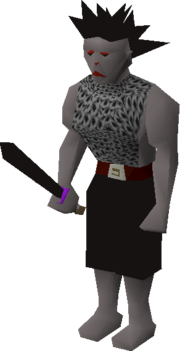 The Black Knight Titan is encountered during the Holy Grail quest. He is reasonably powerful for his level; but his attacks are inaccurate and very slow. He should be fought with Melee, as he has exceedingly high Ranged and Magic defence. If the player is not holding Excalibur as his hitpoints reach 0, he regenerates back to full hitpoints and players must kill him again. This means either the finishing blow must be dealt using Excalibur, or (if using a delayed attack such as magic or ranged) Excalibur must be switched to before the blow hits him. Since the titan is immobile, players with a fast weapon may employ a hit-and-run technique to kill the titan without being hit. Players can also use a halberd from two squares away to melee him without taking damage.

Players will only gain one experience for every point of damage they deal against him (this is not the case when fighting the Black Knight Titan in the Nightmare Zone). He also must be fought every time the player wants to pass him until Sir Percival becomes king. When he is killed, players will receive a message saying: "Well done, you have defeated the Black Knight Titan!"

He can be fought in the Nightmare Zone after the quest is complete. Excalibur is not required when fighting him there. The Black Knight Titan is considered a Hill Giant for clue scrolls and Slayer tasks.

The average Black Knight Titan kill is worth 248.49.