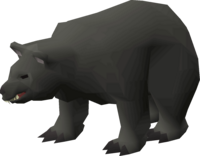 Black bears are large monsters that can be found in forests and are the weaker, non-aggressive cousins of the aggressive grizzly bear.

Despite their non-aggression, they can pose a threat to newer players who accidentally attack them, although safespots can usually be found for rangers and mages.