The black cane can be obtained as a reward from Easy Treasure Trails. As with most black equipment, level 10 Attack is needed to equip this item. It is not used often as a weapon as it has the same stats as a black mace, although some players use it as a show of wealth.

This cane is topped with a cut ruby gem. The cane is popular because of its looks, going well with items that match the colour such as black elegant clothing. As a result, its street price is higher than its adamant and rune counterparts, despite them being both better weapons and rewards from higher-level treasure trails. Like all Treasure Trails items, the cane can be stored in a treasure chest in a Player-owned house.

As with all black and white equipment, the Black cane cannot be made from raw materials using the Smithing skill. 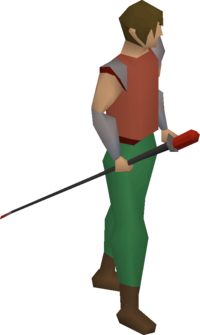 For an exhaustive list of all known sources for this item, see here (include RDT).
Retrieved from ‘https://oldschool.runescape.wiki/w/Black_cane?oldid=12452890’
Categories:
Hidden categories: