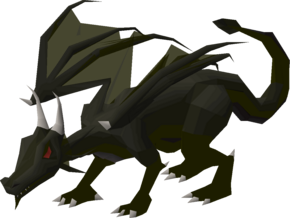 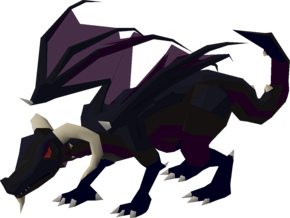 Black dragons are very powerful monsters, and like all other dragons, an anti-dragon shield or equivalent or Antifire potion is recommended in order for the player to protect themselves from their dragonfire. They are also the strongest common chromatic dragon in-game. As with all other common chromatic dragons, their dragonfire attack is melee-only. Black dragons are the only common chromatic dragons that drop the draconic visage. Notably, the stronger level 247 variant in the Wilderness Slayer Cave drops the draconic visage at a rate of 1 in 5,000, the most common out of any dragon tied with the King Black Dragon and Vorkath.

One is fought during Dragon Slayer II.

The Evil Chicken's Lair has four black dragons, the most out of any common area. Black dragons here require starting Sir Amik Varze's subquest in Recipe for Disaster, and until the dragon token is redeemed, they will only drop it and their 100% drops. Accessing this area requires a raw chicken offered to the chicken shrine in Zanaris.

Two dragons may be found in the Corsair Cove Dungeon. Accessing this area requires completion of Dragon Slayer II, but it is the closest location to a bank.

Black dragons may also be found in the Wilderness in two locations; the Lava Maze Dungeon and Wilderness Slayer Cave. There are two dragons in the Lava Maze Dungeon, and accessing them requires a lengthy trek through the Lava Maze, unless the player has 82 Agility (boostable at 77). Some antipoison may be needed due to the presence of poison spiders near the dragons. There are also three dragons in the Wilderness Slayer Cave; these dragons are slightly stronger to those found in the other locations mentioned above and are the only ones to reside in a multi-way combat zone, but are faster to access compared to the ones underneath the Lava Maze.

The average black dragon kill while on a Konar task is worth 7,545.88.

The average black dragon in the Wilderness Slayer Cave kill is worth 9,389.58.