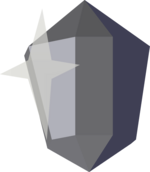 The black prism can be obtained during Zogre Flesh Eaters quest. During the quest it can be found in the coffin to the west of the skeleton on the floor. If you look-at it, there is a description which suggests that it was involved in the explosion that hit the area, and was blasted into the coffin. Zavistic Rarve identifies it as a tool of necromancy. This artefact has been used to populate Jiggig with Zogres. Later in the Quest, the player discovers that it was Sithik Ints who has used to do so out of his hatred toward Ogres. You can sell it to Zavistic Rarve for 2000 coins or Yanni Salika for 5000 coins. This also looks very similar to the Shadow diamond from the quest Desert Treasure and a cut onyx rotated.