The Blackhole, also known as Thordur's blackhole, was Jagex's early punishment system in RuneScape Classic, before the ban system was implemented. Players who misbehaved were sent to the blackhole and would remain there for an undefined amount of time before being removed. It existed throughout most of 2001 until it was removed in December of that same year. 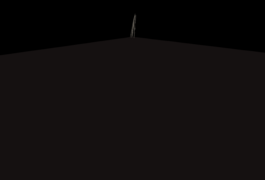 The blacker blackhole, accessible by using the "Blackout" option on the disk of returning.

In Old School RuneScape, players are able to visit the blackhole by selecting the "Activate" option on the Disk of returning while in the Dwarven Mines beneath Falador. Here they can interact with Thordur but will be unable to move around. Activating the disk again will return the player to the mines.

Players can also visit the blacker blackhole by selecting the "Blackout" option on the disk of returning, which takes them to a blank space where they are free to move around. This space allows screenshots to be easily taken without background disruption. Players can leave using the light found in the south-west corner. Warning: Any items dropped on the ground in either hole will be deleted upon leaving.

The blackholes have strict teleportation restrictions that cause any teleportation method other than the disk of returning to be blocked, prompting the message "You can't teleport out of the hole!" Logging out and back in will return the player outside, though.

Note: You can still get out of both holes after dropping the disk of returning, either by talking to Thordur and asking how to get out, or by exiting through the light in the blacker blackhole.

Upon the release of Thordur's blackhole in early 2001, some players deliberately misbehaved and violated the Code of Conduct for the sole purpose of seeing what the blackhole was like. As a result of this, Andrew Gower made the decision to program a clone of the blackhole, so that any player could visit the area without breaking any rules. Those wishing to enter would visit Thordur in the western side of the Dwarven Mine under Falador, who would sell them a disk of returning for 10 coins. Once the player obtained the disk, they were then able to climb down a nearby ladder to access the cloned blackhole and would use the disk of returning to get out.

The blackhole and its clone were removed from the game in December 2001 due to a scam where unsuspecting players were told "something interesting would happen" if they dropped their disk of returning, causing them to be stuck in the blackhole until a Jagex staff member removed them.