From Old School RuneScape Wiki
(Redirected from Blast furnace)
Jump to: navigation, search
The RuneScape Wiki also has an article on: rsw:Blast Furnace

The Blast Furnace is a members-only minigame situated in Keldagrim for smelting bars. The furnace here only requires half as much coal when smelting usually, so it can be useful when smelting the ores that require more coal.

There are 15 Blast Furnace worlds on Old School RuneScape, all of which make soloing the Blast Furnace easy as there are five different dwarves - Dumpy, Stumpy, Pumpy, Numpty, and Thumpy - operating the mechanics of the Blast Furnace, so the player only has to focus on running the ores to the conveyor belt.

Travelling and getting to the Blast Furnace[edit | edit source] 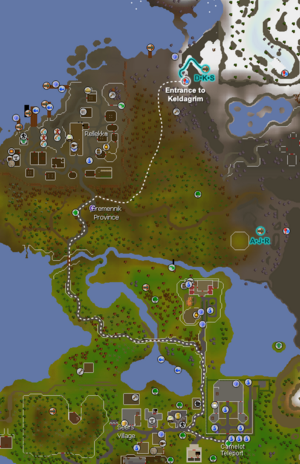 The Blast Furnace is located in Keldagrim. To enter Keldagrim, the player must have started the quest The Giant Dwarf by speaking to the Dwarven Boatman within the mines east of Rellekka. The map on the left shows a path the player can take walking from Seers' Village/Camelot to the mines east of Rellekka. Once the player has visited Keldagrim at least once, they can return via mine cart from the Dwarven Mines under Ice Mountain or the Grand Exchange, or use the Minigame Group Finder to teleport right outside the Blast Furnace building. 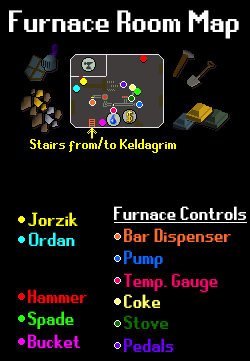 A map of the Blast Furnace room itself.

It is highly recommended to wear weight-reducing clothing to save run energy while moving heavy ore and smelted bars (Note: the Spottier cape and the Boots of lightness will reduce your weight by an additional 1kg over the Graceful cape and Graceful boots). Coins can also be used to pay the Blast Furnace Foreman for more time or to purchase ore there from Ordan. A coal bag is recommended if using an ore that requires coal. For maximum efficiency, stamina potion should be used. A ring of endurance may also prove helpful. If you have less than 60 smithing, you will need to pay a fee every 10 minutes.

The suggested inventory is a bucket of water, a coal bag (if needed), and 26 ore. When using ice gloves, replace the bucket of water with an ore. Withdraw stamina potions and gold as needed depending your level.

Full Smithing experience is gained from smelting the bars. There is also an anvil nearby to smith your bars, which the foreman will let you use if you have level 60 Smithing.

At the Blast Furnace, the following Smithing XP can be gained producing bars. Moreover, the following assumes that the player has a coal bag in their inventory and are wearing ice gloves, thus there are 27 inventory slots occupied by ore.

The Blast Furnace provides a great opportunity for players to reap great profits by producing a large volume of bars.

Note: The table below has already taken into account the 72k per hour for using a designated blast furnace world. These numbers assume the use of a coal bag, ice gloves, and 36 doses of stamina potions per hour. Always check current selling prices, as these numbers can change frequently.

Raw materials can be obtained in two ways:

IMPORTANT: All of the other tasks described by the Foreman are done for you by the dwarves running the Blast Furnace on the designated Blast Furnace worlds. For this service, it costs 72,000 coins per hour, but is highly recommended for speed of training. 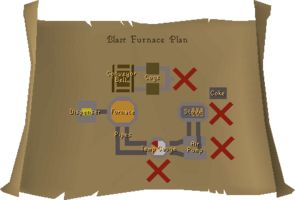 The process for operating the Blast Furnace is as follows:

The Ore Seller, run by Ordan, is one of many of the stores in Keldagrim and can be found downstairs in the Blast Furnace factory in the eastern side of Keldagrim. This shop stocks ore used for Smithing. The shop is restocked by dwarves that regularly enter the room and deliver a number (around 30) of one type of ore to the shop, rather than restocking 1 of every ore periodically. When the shop reaches 100 of a particular ore type the extra are "sent to storage".

All high-level ore, such as adamantite and runite, must be in the player's bank as they cannot be bought from Ordan. Coal can be bought from Ordan, but the quantities required for high-level ore usually exhaust his stock after only making one inventory of bars. Therefore, it is recommended that players only use Ordan as a supplemental source and have most or all of the required coal in their bank.

An example of mithril-processing using the shop[edit | edit source]

Ordan sells all types of ore up to mithril, which allows a player to train Smithing without mining ores. The process for smelting mithril bars is as follows:

Each bar has an optimal pattern to minimise the amount of running to the bank. Following these patterns you should never have to run back to the bank with ores, and never have to make a trip just to pick up bars. These patterns assume you have a coal bag. It is also easier to keep an extra 27 coal in the furnace too so there is less delay for your bars to be ready.

With the coal sack making gold and one of the more valuable bars at the same time can be done in conjunction as a more efficient method for xp and gold generation. An inventory will consist of the coal sack, goldsmith gauntlets, ice gloves, and either 26 gold ore or 26 mithril/adamantite/runite ore. Because every load of gold ore also adds 26 coal to the furnace it results in a hybrid method that produces more gp and xp than otherwise.