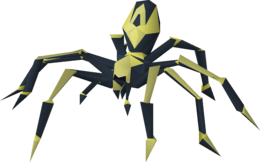 A blessed spider is a type of spider found only in the Underground Pass. They are found on the west side of the bridge and in the pit where Kalrag is located. They are believed to be blessed or "converted" to Iban. Like most spiders, blessed spiders attack with melee and are weak to crush.