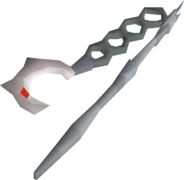 The blisterwood flail is a one-handed melee weapon created during the Sins of the Father quest by combining a Blisterwood sickle with the Ivandis flail.

The flail requires an Attack level of 50 to wield, and gives a 25% damage and 5% accuracy bonus against vampyres.[1] Though it can autocast spells, it is outclassed as a high-prayer bonus magic weapon by any crozier, and no spells are capable of dealing damage to vampyres.

The flail is also effective in damaging the vyrewatch, due to the flail being incredibly unpredictable and random, which allows the player to circumvent the vyrewatch's mind-reading ability.

The blisterwood flail retains the ability to cast Bloom from the silver sickle (b) and the Ivandis flail. This multiplicity of use lets a player kill ghasts, vampyre juvinates and vyrewatch with a single weapon, making it highly useful for Temple Trekking.

The blisterwood flail retains the Ivandis flail's special attack, Retainer, which traps a vampyre juvenile or juvinate that has less than 50% hitpoints remaining, preventing it from retaliating. This consumes 10% of the player's special attack energy.