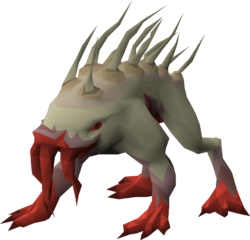 Blood Reavers are a type of demon in the service of Zaros found in the Ancient Prison within the God Wars Dungeon. They attack using a spell that resembles Blood Rush and can heal themselves a percentage of damage inflicted.

Blood Reavers are also summoned during Nex's blood phase, where she will summon them to attack players. If they are not killed quick enough, their remaining hitpoints are transferred to Nex's.

Drop rates estimated based on 56,522 kills from the Drop Rate Project, unless otherwise cited.