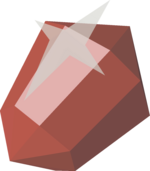 The blood diamond is one of four Diamonds of Azzanadra obtained during the Desert Treasure quest. It is obtained by defeating Dessous and then talking to Malak who will give the player the diamond.

It is recommended that players deposit this gem in the bank as soon as they obtain it, along with the other Diamonds of Azzanadra, as a level 95 stranger may appear and attack them if they are holding one of them. The more diamonds you have on you, the more likely the stranger will appear and attack you.

Should the player lose the diamond or want to collect another via drop trick, speaking to Malak will allow another one to be obtained. However, all variants of the silver or blessed pot will remove taken from the player and the only way to avoid this is dropping them. To keep a copy of the diamond after the quest, drop a duplicate before putting the last Diamond of Azzanadra into the pyramid's final unpowered obelisk and it will be safely kept afterwards, even upon quest completion.