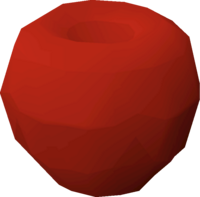 Blood spawn are monsters that spawn during the The Maiden of Sugadinti encounter in the Theatre of Blood, in which up to eight can spawn. If players successfully avoid the Maiden's blood splat attack, the chances of a blood spawn spawning are halved.

They wander around the arena, creating lines of blood which deal damage if stood upon.

Despite never attacking the player directly, casting Monster Examine will reveal that it has a stab attack style and a max hit of 1.