The melee defence is comparable to adamant armour, and the total Magic bonus is 1 less than that of mystic robes. In addition to their stats, each piece of armour increases the amount that blood spells heal by 1.5%. When the full set of armour is equipped, blood spells will heal the caster's Hitpoints by 32.5% of the amount of damage inflicted.

It can be stored in a magic wardrobe in a player owned house. 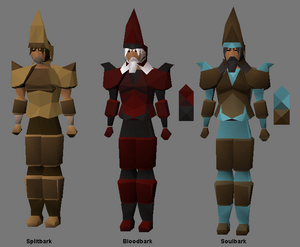 Bloodbark armour as shown in the Warding Design Blog.

Bloodbark armour was originally proposed alongside the Warding skill. In the original proposal, players would have been able to ward the robes with level 55 Warding using vyre silk and bloodbark, and would have required level 55 Magic and Defence to wear. The magic attack stats for the armour were also higher than the version that was eventually repolled and released. The original stats are shown below.