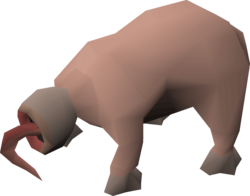 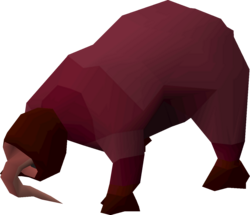 Bloodveld are a type of demon that use their long tongues to attack their victims. Being a Slayer monster, Bloodveld require a Slayer level of 50 to be damaged by players.

While on a Bloodveld Slayer task, there is a 1/200 chance that an insatiable Bloodveld will spawn after you kill a Bloodveld (if you have Bigger and Badder unlocked).

Bloodvelds are one of few monsters that attack with magic-based melee, meaning that despite it using melee attacks against the player, it is the player's magic defence (rather than their melee defence) that is used to determine the accuracy of the Bloodveld's attack. As such, it is recommended for players killing Bloodvelds to equip armour with decent magic defence, such as dragonhide, as they are relatively accurate in combat. Players using prayer should still pray melee instead of magic to nullify damage.

They can be safespotted on the north-eastern corner of the centre room of the Slayer Tower behind the chair, or they can also be safespotted next to the armour stands and wardrobes around the walls of the central room. In the task-only basement floor, they can be safespotted in the north-west corner of the area by standing in between the chest, chair, broken table and shelves. Bringing nature runes for alchemy spells is a good idea, as they frequently drop fire runes and items with a decent high alchemy value.

They can also be safespotted in the Stronghold Slayer Cave while using a dwarf multicannon in the north-east section of the Bloodveld area, but this area is usually busy.

Another safespot in the Stronghold Slayer Cave is in the east room, north of some rocks and east of a pillar.

In the God Wars Dungeon, they can be safespotted behind the piles of bricks directly north-east of the exit rope. Both a Saradomin item and Zamorak item are required to use this safespot. Another safespot will be even further north-east, behind the rock formations on the coast (only requires a Zamorak item once in the safespot).

Drop rates estimated based on 803,317 kills from the Drop Rate Project, unless otherwise cited.

The average Bloodveld kill while on a Konar task is worth 1,638.

There is a 1/32 chance of rolling the gem drop table.

A player must kill a Bloodveld for an elite cryptic clue, stating: "You'll get licked."