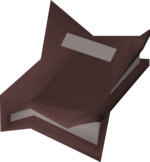 The bloody diary is a book found in the Grand Library in Prifddinas, which requires completion of Song of the Elves to access.

The diary was written during the War of the Five Houses 200 years ago by an unnamed adventurer from Hosidius. However, most of the pages have been stained in blood and cannot be read by the player.

The few entries that remain unstained describes the adventurer's return to Great Kourend after the war, some of his adventures in Varlamore, as well as nearly discovering how to create Arclight.

The following text is transcluded from Transcript:Bloody diary.
33 - 124

In my travels throughout the Shining Kingdom, I have bested many mighty creatures. From the Colossal Wyrm of the Avium Savannah to the Cloud Titan of Tempestus, I am proud to proclaim myself as a master slayer.

However, I have received news back home from a dear friend that the War of the Five Houses has ended, and I believe it is about time I return to Kourend. The war started from some petty squabble between the lords and ladies of the five Houses, and I do not regret leaving at all. My expertise lies in killing monsters, not my fellow man.

I shall sail to Land's End once night falls.

The trip back to Kourend was strangely quiet, as if the waves were intent on getting me home safely. I decide to set up camp in the woodlands before I return to Hosidius.

I wonder if my parents are still alive; did they survive the war? If they did, would they be glad to see me after all these years? I did not leave on the best terms, after all. They wished for me to remain a farmhand, while I was ambitious to go on my own adventures. They were not happy when they caught me leaving home in the middle of the night.

Somehow, even after the ravages of war, my old home remained intact, though the farm seems to have become much smaller. My mother was shocked to see me return, despite our last encounter. She told me father survived the war, but she tells me since its end, there have been abductions occurring in the middle of the night, and father was just abducted the night before my return.

Furthermore, she managed to strike the assailant with her kitchen knife, and tells me the blood was jet black. I have no doubts about it. The magic keeping the monsters in the Catacombs has begun to waver, and demons have begun to climb to the surface, abducting innocents.

I shall travel to Arceuus and investigate these occurrences.

While I make my way to a remote entrance to the Catacombs, I look back on my jet black sword I acquired during my travels in Varlamore. I recall encountering a particularly nasty demon capable of summoning torrential rainstorms in the Avium Savannah.

Being requested by a group of dwarves underground to quell the demon's rage, they forged me a silver sword combined with some mystical metal, which they claimed was carefully tuned to greatly harm demons.

Using this silver sword, I slayed the demon with ease, but not before its blood permanently stained my sword black.

I may have use for this sword now.

Entering the Demon's Run, I find the Catacombs littered with dark, purple crystals, as if the creatures within broke them off into small shards for one reason or another. These shards seem to gravitate towards my sword like a magnet, as if wanting to be fused with it, but somehow unable to. I quickly shave them off my sword, believing it might dampen the sword's power.

Further into the Catacombs, I managed to slay several demons. One of them carried a particularly odd object, appearing to be a key of sorts, and oozes with the same power from the Dark Altar.

The key pulls me toward the centre of the Catacombs, where I saw a small altar with three prongs. Here, the key pulled even stronger towards it. Perhaps I am meant to place the key on this altar?

For now, I shall return to Arceuus and rest before trying to place that key.

I have made a big mistake.

I placed the key and was teleported into a large, empty chamber. I thought myself alone, until a large, dark demon made its presence known to me. I stabbed it with my sword, but it seemed to have no effect. Did the shards weaken it after all? Or was it too powerful for the sword to harm it? Before I could gather my thoughts, the demon grabbed me and threw me across the chamber, breaking my spine.

Before it could reach me, I spotted a portal in the corner of the room. I did not care where it led me, as long as it was far away from that demon.

I ended up right here, by the altar where I had placed that key. I continue to write in my diary, hoping someone would come to rescue me.

Look at me. A mighty adventurer, mortally wounded by that damned demon. As I feel myself slipping away, I continue to wonder. Why did those shards try attaching itself to my black sword? Perhaps they wished to empower the sword, rather than weaken it? I guess I'll never know.