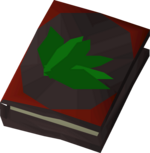 The bloody grimoire is an old book that can be found in the Sisterhood Sanctuary. It can only be obtained by using the Telekinetic Grab spell to reach it.

The book describes the author's discovery of a damaged version of the Senntisten Scriptures from their slain enemies, and using what little blood magic they could learn from it to create blood potions; namely, the bastion and battlemage potions.

In addition, there are two recipes for a totality and vigour potion, but were crossed out due to instability and lack of ingredients, respectively.

The following text is transcluded from Transcript:Bloody grimoire.

An evil has swept into our lands and we have been called to protect the weak, but we are vastly outnumbered. The healing came easy when my belief wasn't waning, when our lands were not beset by the beautiful rot of chaos.

The horde have magics and morals well beyond ours. They drain the life from their victims and embrace the darkness that heals them of their wounds, while the light of Saradomin forbids us of such heinous acts.

We stand beaten, bloody and bruised from another conflict with the enemy. Their ferocity knowing no bounds as we pile the dead by the dozen onto the carts. Amongst the dead I found a version of the Senntisten Scriptures, mostly damaged beyond recognition, but I got enough to understand the basics of blood magic.

I have found it! By using blood with various potions, I've managed to bind together the offensive and defensive properties. Early prototypes were harmful to ingest, but that no longer seems to be an issue.

Bastion Potion
A strong mix of ranged and defence, perfect for an archer in a rough situation.
- 1 pint of boiled blood
- 1 cadantine sprig
- 2 pints of Zamorakian wine.
Note: Recent victories have provided us with copious crates of this unholy liquor. The sweet taste has been... difficult to resist.

Battlemage Potion
A bright mix of magic and defence, perfect for a wizard in a tough situation.
- 1 pint of boiled blood
- 1 cadantine sprig
- 1 potato cactus.
Note: Potato cactus stock alarmingly low, shipments from the Kharidian desert have been lacking as of late.

Totality Potion
An overload of everything, but not too much to cause harm to one's innards.
- 1 super combat potion
- 1 ranging potion
- 1 magic potion
- 1 pint of boiled blood
- 1 torstol sprig
Note: Unstable, currently too dangerous to make, let alone drink.


Note: Ingredients ran out before results were satisfactory, something is missing.