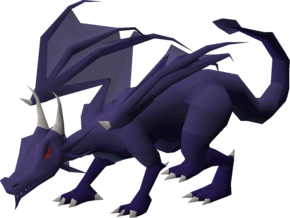 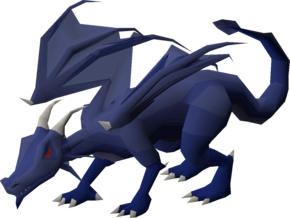 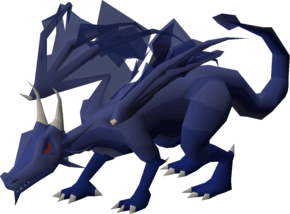 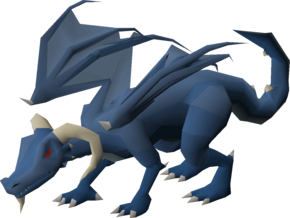 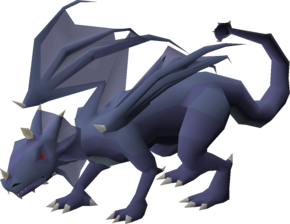 Blue dragons are the third strongest of the chromatic dragons, behind red dragons and black dragons. Like all dragons, they can breathe dragonfire, which can inflict up to 50 damage if proper protections aren't used. Dragonfire can be mitigated by equipping an anti-dragon shield or a dragonfire shield – alongside the usage of an antifire potion, which will completely negate dragonfire damage. On top of the strong dragonfire breath, they also attack with an accurate slash attack.

Blue dragons are assignable as a Slayer task. If players wish to avoid the blue dragons, they can kill baby blue dragons within the Myths' Guild, Isle of Souls or the Taverley Dungeon.

With a surprisingly fast respawn time of around 20 seconds, even areas with single spawns are suitable for training or collecting resources.

The following methods will provide 100% protection, but each has its own pros and cons:

Alternate methods to avoid usage of potions includes the Heroes' Guild, which has a blue dragon in a fenced off area that can be safespotted. If one has partially completed Watchtower, there are safespots in the Ogre Enclave with six dragons that spawn. Taverley Dungeon also has some safespots with the use of the columns and big eggs. In the upper level to the north-west there are some rocks you can safespot behind. You can also stand at the top of the stairs and safespot the closest dragon between the eggs and Stalagmite. In the passageway to the black demons next to the agility shortcut a single blue dragon and baby blue dragon can be safespotted. Below the Myths' Guild, in the Corsair Cove Dungeon, there are multiple safespots and practically no competition from other players, as the requirements to get there are quite high.

There are 2 safespots in the Isle of Souls Dungeon. One is in the cul-de-sac of salagmites that contain 2 adamantite rocks in the eastern part of the room. Simply walk within the salagmites, east, and you will be out of the reach of blue dragon's attack. The second is in the northern passage of the Blue Dragon room. Position yourself in the northern passage. There is a level 25 skeleton patrolling the northern passage. The dragons cannot reach you up by the skeleton. You can attack with range from here. You can also get a Baby Blue Dragon caught in-between you and the Blue dragon, which will act as a barrier.