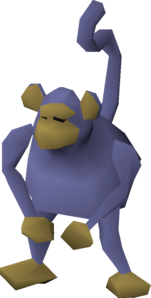 A blue monkey is used in Trouble Brewing to gather Bitternuts. They are made by using a Bowl of blue water on a monkey that has been caught. The dyed monkey can be used on a Bitternut tree, and it will throw down a bitternut to the player. If a red monkey in the tree as well, the two monkeys will fight, only one will throw down a bitternut, and the other will disappear.

A Monkeyspeak amulet is very useful for gathering bitternuts, as the player can "Anger the monkey" or "Caution the monkey". An angry monkey will grab the nut quickly, but will usually lose a fight if there happens to be one. A cautious monkey will take longer to grab the nut, but most of the time win a fight. A player can have a maximum of two monkeys, and a team can have a maximum of twelve.