Bob, another guard of Falador 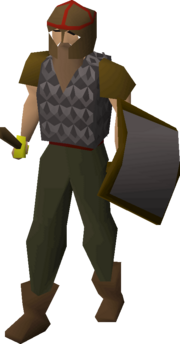 Bob, another guard of Falador is a Falador guardsman seen during the Garden of Tranquillity quest. Bob is shown to be working with another guard named Billy, to protect Falador's northern entrance. Both are subsequently killed by PKMaster0036, a player spoof.

Bob and his colleague's deaths allow the player to sneak a statue of Saradomin out of central Falador and unnoticed, eventually allowing them to reach the Varrock Palace gardens. Billy and Bob cannot be encountered outside of the cutscene. They are also referenced briefly during the Ratcatchers quest, in which guards in the East Ardougne mansion occasionally say "I miss Billy and Bob."